As far as I know Delhi is at least 2000kms from the nearest sea. Yet it was hit by a tsunami on the morning of the 10th of February that will change its political and social landscape for ever.  For the second time in less than fourteen months a nondescript, diminutive man with baggy trousers and a persistent cough, with just 20 crore rupees in his pocket has humbled the two largest national parties in the country with a combined ancestry of 150 years and coffers overflowing with more than 4000 crore rupees. By winning 67 of the 70 seats on offer he has done what no other political party has ever done in any state. In the process he has faced down every vested interest and bloc in the country – the bureaucracy, the media, the police, organised industry – and been subjected to every abuse in the Indian political lexicon. Kejriwal’s stupendous and overwhelming victory in Delhi will rewrite the rules of politics in future, for the Indian voter has now seen at first hand that HE CAN BE THE CHANGE THAT HE WANTS. There is much to be learnt from this election and given below are some of these lessons. 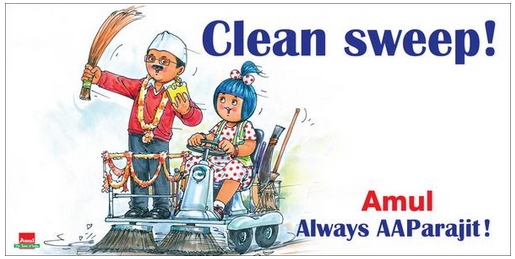 The Aam Aadmi Party (AAP) has emerged as the undisputed regional party of Delhi, just as SP, Telugu Desam and TMC, to name just a few, are the dominant regional parties in their respective states. It has been able to successfully articulate the specific demands and needs of the citizens of Delhi such as electricity, water, women’s safety, slum improvements, shortage of colleges, corruption and so on. In the process it has highlighted, by contrast, the fatal flaw in the BJP campaign – the stress on “achievements ” at the national level at the cost of local issues. The AAP exposed this misplaced emphasis brilliantly, for the ordinary citizen of Delhi, almost half of whom live in slums and unauthorised colonies, is more interested in the quality of his daily life and not in FDI or nuclear deals. Like all regional parties AAP perhaps understands the pulse of the voter better than national parties which tend to look at everything through the prism of Delhi.

But the unique quality of AAP is that it has the promise of being much more than just a regional party, and not just because Delhi has people from every other state in India in ever increasing numbers. It is because the very psyche, the essential philosophy of AAP is national in an ideating way. Firstly, its core agenda – corruption, focus on the common man, safety of women, electoral reforms, transparency – has a pan India appeal and is not limited to any region or state. Second, the appeal and reach of AAP is not based on any vote bank (unlike the other regional parties). AAP does not pander to any particular caste, or religion, or community, or even any income group. The voting pattern in Delhi establishes this beyond any doubt: by winning in 67 out of 70 constituencies, by winning in Trilokpuri as well as Greater Kailash, in Okhla as well as in New Delhi, in Matiamahal as well as in Harinagar, in Jangpura as well as in Patel Nagar, the party has convincingly debunked the misplaced theory that it appeals only to the poor, the Muslims and the Scheduled Castes. 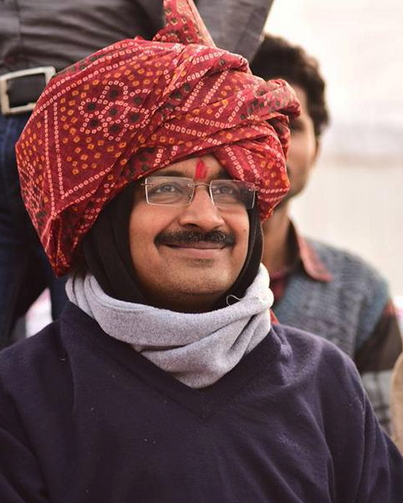 This phenomenally broad allure of AAP gives it a national quality, in the true sense of the word, not just in the mathematical sense in which the Election Commission categorizes a national party. In other words, the AAP is emerging as a SYNTHESISER of political and social aspirations, in the same manner as the Congress was at the time of Independence and later during the rule of Nehru, Shastri and the early Indira Gandhi, or in the manner of VP Singh before he let his ambition and Mandal consume him. Like the early Congress, the AAP has been able to bring under one umbrella the aspirations of various social groups and transmute them into a core agenda that has found popular support. It is ironical that whereas the BJP has almost succeeded in giving the country a “Congress Mukt “(Congress free) Bharat or India, it has not been able to occupy the space vacated by the Congress because of its hubris and angularities, and has instead allowed the AAP to enter this space.

The overwhelming victory of the AAP has positioned it well to become the catalyst for a united Opposition, something which the Modi juggernaut badly needs. It can now become the nucleus around which other opposition parties can coalesce. In January 2014 I had penned a piece in these columns – IS AAP THE REAL THIRD FRONT? – in which I had visualised just such a possibility. The reactions of Omar Abdullah, JD(U), TMC and other parties hold out this promise in times to come. For the AAP victory in Delhi is too huge to be attributed to local factors, or to Kiran Bedi, alone. It reflects an emerging disenchantment with the BJP at the national level, and therefore it argues for a National Alternative, which the AAP can now initiate. 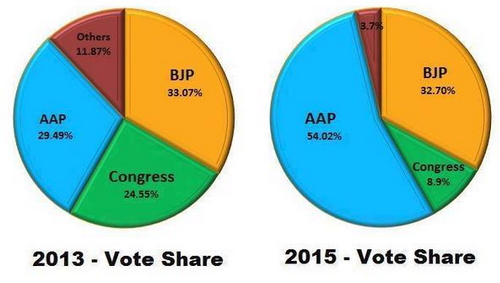 Even more important, the AAP under Kejriwal is the true harbinger of change and transformation of the cesspool that politics in India has increasingly become. It is because its politics has a moral and ethical underpinning, a principled core that none of our parties has. AAP seeks to promote decentralised administration, a Praja Raj in the place of the present Neta Raj and Babu Raj. It unabashedly challenges the status quo which only benefits the few, which is why it is so detested in the salons of South Delhi and the farmhouses of Chhatarpur. Not surprisingly, therefore, Kejriwal has been called “toxic”, an anarchist and a Naxal (by the Prime Minister, no less!) and has had at least ten police cases registered against him. These are the time honoured tactics employed by those who resist any meaningful change and Kejriwal has prevailed in spite of them, maybe because of them! But his victory in Delhi has released this particular genie from the bottle and I have no doubt that in the coming months and years we shall be witnessing a metamorphosis in the nature of political discourse in the country, the manner in which political parties raise funding and select candidates, the equation between the rulers and the ruled, the relationship between the Center and the States. No party has seriously articulated these issues: they have been used simply as stepping stones to power, and forgotten once power is attained because such questions, we must not forget, challenge the powerful. But Kejriwal is not likely to forget them because they are the cornerstones of his victory.

Kejriwal as Chief Minister will change the dynamics of Delhi in a significant way. The city will no longer belong to those who reside in Lutyen’s Delhi or in South Delhi alone – the majority shareholders of the metropolis in unfashionable addresses like Bawana and Narela, Geeta Colony and Mahipalpur will increasingly stake their claim to a slice of the capital’s pie of Rupees 40,000 crores. Mr. Modi too cannot for long continue to treat Delhi as an enclave of the Central government; one of Kejriwal’s main promises to the people was statehood for Delhi – they have enthusiastically supported it and it can be ignored no longer. With more than two thirds of Delhi’s voters supporting this demand Modi can ignore it only at his own peril. In some manner or the other the central goernment will have to part with its stranglehold on the DDA, MCD and the Delhi police – this is inevitable, as are the confrontations that will precede it. Kejriwal has a renewed and revalidated mandate for it, much as the elite may decry it, and I foresee the struggle for control of Delhi as part of a larger redrawing of relationships between the centre and the states

There are important lessons for the BJP too from these elections. 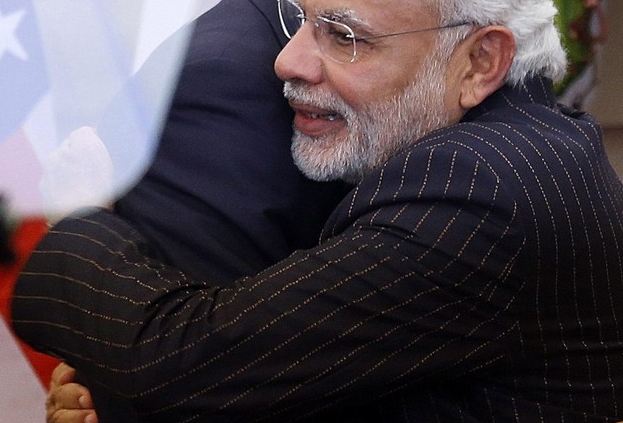 Mr. Modi must realize that his personal evolution over the last nine months has disappointed the electorate and they do not approve of it. They would like to see the Modi of May 2014 who spoke of a bright future, of economic growth, of a tolerant society where the minorities did not fear the majority, of a government, both transparent and responsive. They do not want the Modi they now see instead – domineering, uncommunicative, unresponsive, contemptuous of civil society or any dissent, tacitly supportive of rabid fundamentalism. They want to see him as the chai-wallah, not the fashionista in Ten Lakh rupee suits. No amount of economic achievements can compensate for these attributes and expectations in a democracy and Mr. Modi would do well not to see the Stock Exchange as his barometer of success: after all, not even 2% of our population plays the market, while 67% vote. The Prime Minister has to go back to being the Modi of early 2014.

The BJP, on the other hand, has been conveyed an even more seminal message by the voter of Delhi — the politics of polarisation will just not work anymore in a country where 970 million cell phones have been sold; with almost 250 million internet users. The people have seen through the “good cop – bad cop” pantomine and do not approve of the BJP’s (and its government’s) covert support for the Hindu majoritarians, for the Vedic dinosaurs from a bygone era. The BJP must realise that it cannot project a modernistic Prime Minister while at the same time validating the primordial nonsense spouted by its Ministers, Sadhvis, Sakshi Maharajas, and ramming forcible conversions, Sanskrit, Love jihad and Good Governance Day down the throats of its people. Delhi has shown that such a duplicitous approach does not pay dividends. It alienates the party from the minorities, dalits, the youth, the professionals and all thinking people, even the moderate and liberal Hindu. The proof lies in the results of the Lok Sabha elections when the BJP romped home on the exclusive promise of development. In the last nine months it has gone back on this pledge, and the Delhi voter has punished it emphatically – in 2014 ( Parliamentary elections) the party had won in 60 of Delhi’s 70 constituencies: today it has won in only 3. Can the people speak any louder?

Kejriwal has set the agenda for the future, and the people have endorsed it. The Indian voter has come of age, and the Delhi results are as much his victory as that of Kejriwal. Mr. Modi has made some mistakes in the last few months, but he should remember that the most liberal education is learning from one’s mistakes. A defeat can become a victory if one derives the right lessons from it.