Dehra Dun : Delhi the national capital saw the most ever one-sided election in the election history of this country. There is been no earlier occasion, and it is doubtful that there will ever be another one in coming times when one party will bag more than 90 per cent of the total seats. AAP has done it and the Aam Aadmi has once again proved it is hard, if not impossible, to gauge his mind and mood.

Psephologists and exit polls have both been proved wrong. And mind you BJP leaders were right when they said that the exit polls would be proved wrong on Jan 10, after the votes were counted and results announced. Yes, they were proved wrong as the maximum seats given to AAP, which all exit polls showed to be leading, was 45 which even party leaders took with a pinch of salt. The party has got much more.

And now it is not only the political pundits and election observers, but the BJP high command that will go into a hustle wondering how did AAP do the impossible and get the number of seats that it got. Even the BJP chief ministerial candidate and an able confident looking Kiran Bedi lost her seat much to the chagrin of the BJP think tank who had made her the party face in the Delhi elections and dubbed it a master stroke.

Party detractors may cite a number of reasons for the stunning loss of the BJP, that was more or less wiped out like the Congress in the Delhi elections, like naming the chief ministerial candidate and not timing the elections properly (they should have been held immediately after the Lok sabha elections when the party won all the seven Delhi seats), but the one thing that stands out to me is the fact that the party had lost its credibility. 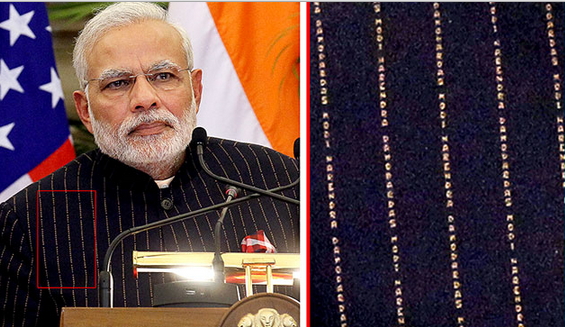 And the reason for this is the much publicized Rs 10 lakh suit that Prime Minister Narendra Modi wore during US President Obama’s visit. One must remember the fact that the credibility of Modi was that he was taken to be pro-poor, one who understood the problems and travails of the poor common man, the Aam Aadmi who was being literally hounded by the Congress leaders and the babudom in the Congress regime.

There was a feeling that once this one-time tea seller takes office as Prime Minister, he will find a way out for the Aam Aadmi and the much touted achche din will come. But rather than the achche din, here was this man wearing a Rs 10 lakh suit and questions started doing the rounds. Could he make the suit in the salary that he makes as prime minister of the country, or did he also get it in some other manner is what came in for intense scrutiny in the election run up.

Common rhetoric here in the capital of even Uttarakhand, which is perhaps not as literate as Delhi, is that the Aam Aadmi is not one who wears a Rs 10 lakh suit and this is why they went with Kejriwal who has shown to be more simple is his every day life. Even in victory they say that the AAP supremo has asked his workers and leaders not to let the victory go to their heads, but to become even more humble because of the victory.

And so Narendra Modi despite his best intentions for the Aam Aadmi, and his known clean life, having risen from the low ranks to the highest office in the country with a clean slate, lost credibility among the Aam Aadmi. It is also known that Modi is the face of the BJP in India, having won the last elections purely on his name. But this time the face had lost its credibility, specially in Delhi, where the electorate is literate and comes to grasp things more easily and quickly than other parts of the country.

So the BJP lost credibility with the Aam Aadmi in the national capital and those who were expecting things to change for achche din realized that perhaps only Kejriwal and his AAP offer only solace to the common man. The fact that the fledgling party got an incredible 54 per cent of the total votes polled proved the fact that what Kejriwal was saying all along, ‘truth will eventually prevail’, did actually prevail.