Arvind Kejriwal is the most under-rated man in India today- even now, even after he has staged the spectacular coup in Delhi.

Most political parties consider him a flash in the pan: the Congress sees him as a limited urban phenomenon which will have no effect on its traditional rural vote banks nurtured by the politics of “entitlement”; the Samajwadi Party and BSP still feel secure in their carefully woven cocoons of religion and caste, respectively; the likes of AIADMK in Tamil Nadu, BJD in Odisha and TMC in West Bengal are confident that the regional broth they have been cooking in their states has no place for any other ingredient; and the BJP, still smarting at being denied power in Delhi, is so far into denial mode that it refuses to even recognise the Aam Admi Party (AAP) as anything but the B team of the Congress! 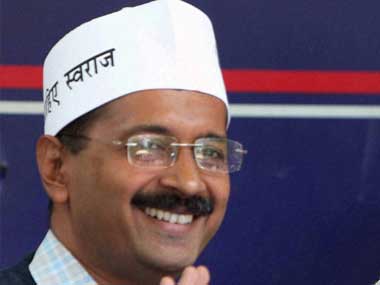 In short, they all see Kejriwal, the Chief Minister of Delhi, as nothing but a latter day Bahadur Shah Zafar, whose writ does not prevail beyond the Yamuna.

What they tell us is that Kejriwal is a brilliant tactician, a master of guerrilla warfare who has completely routed the overwhelmingly superior forces of the Congress and the BJP by skilfully changing the rules of engagement.

In the process he has caught the imagination of the entire nation and resurrected the hope that change IS possible. It is not only the issues he took up, but the manner in which he took them up, the personal demonstration of his beliefs, that made the difference in Delhi. Here’s a list of what he did differently:

The success of the “Kejriwal package” should not be seen only in the 30% vote share or the 28 seats he garnered in Delhi. Its true success-and future implication and promise-lies in the manner in which it has instantaneously changed the political narrative and public attitudes of our rulers.

The BJP forewent the support of four MLAs in Delhi and sulked in the Opposition benches, whereas earlier it could have purchased them in to time at all; Sheila Dikshit started the process of moving out of her palatial bungalow within days of losing office; Vasundra Raje voluntarily reduced her security entourage ( and yesterday announced her decision to move to a less palatial residence); the Lok Pal Bill was passed in two weeks by the same Party that had stalled it for twenty years; Rahul Gandhi, no less, publicly stated that there was a lot his party needed to learn from the AAP; the Congress was forced to go back on its earlier decision of rejecting the Adarsh Commission report; the Haryana Chief Minister has declared a reduction in electricity tariff, and Maharashtra will follow suit any day, forced to follow the AAP’s pitch in Delhi.

These are not isolated events but straws in a wind that is in fact the Kejriwal effect. They are welcome harbingers of a gradual change initiated by the victory of AAP in Delhi, and the ripples are moving out of Delhi in ever widening circles, engulfing the dinosaurs that have ruled this country for decades.

The AAP victory in Delhi contains other positive indicators of the paradigm shift we are witnessing in our polity. It convincingly demolished age-old myths relating to elections in India, myths which justified practices that have corrupted and eaten away the very essence of democracy in our country.

For example, Kejriwal completely eschewed calculations of caste, religion or region in both the selection of his party’s candidates or the manner in which he campaigned, catching veteran politicians, psephologists and TV anchors-who can conceive of no other matrix for elections-by total surprise.

And the AAP succeeded hugely in its attempt to show that elections need not be held hostage to these factors-both SP and BSP failed to win a single seat; even better, their vote shares declined massively, indicating that even their presumed ” captive ” vote banks did not vote for them!

The Congress, which believes that it holds a Power of Attorney for all Muslims minorities and ” weaker sections” fared even worse- not one of its candidates from these constituencies won. This has forced the Mayawatis, Mulayams and Lalus of this world to go back to the drawing board, a withdrawal which can have only a positive fallout.

To take another example, AAP contested 70 seats on a budget of Rs. 20 crore only (Rs. 2 crore was saved even out of this!). This works out to just Rs. 25 lakhs per seat, a figure with which no self respecting party in India would even think of contesting a Gram Pradhan seat!

Kejriwal has effectively demonstrated that CLEAN politics is possible, if only our main parties have the will to stop tapping black money, that it is not necessary to bribe voters or ply them with hooch to earn their loyalty.
Can anything be more telling than that a party just 15 months old with 20 crores in its kitty humbled two parties with a combined age of 100 years and coffers overflowing with declared funds of almost 4000 crores?

If this is not the beginning of a non-violent revolution, then I fail to see what it is.

AAP has shown that political parties do not have to ghetto-ise the electorate, carve them into separate components, create divisions among them, to win elections. Kejriwal has forcefully demonstrated that a party CAN appeal to ALL sections and classes of people- urban/rural, rich/poor, majority/minority, upper/lower caste, employed/unemployed- with a message that cuts across these artificial distinctions behind which all major parties have been hiding all these years.

The voting pattern in Delhi proves this- he has been backed by a genuine cross section of all the categories above, and his appeal is not limited to any one of them.

If even the super-rich of South Delhi who rarely come out of their BMWs to rub shoulders with the proletariat stood in line to caste their vote for an unknown ex-software engineer who bearded the lion’s cub in the latter’s own den, surely there is a strong message here?

That the voter of India has finally been released from the shackles of an imposed identity and is now free to vote for a party that transcends such labelling?

Make no mistake – the Agenda for the 2014 elections is now being set by the Aam Aadmi Party.

All major and regional parties are desperately scrambling to reinvent themselves in the image of Arvind Kejriwal and his team. (And that is where the real success of AAP is to be found- politics in India will never be the same again).

Publicly, mainstream parties are in denial mode, but they are worried at the resurgence in the passion which the AAP is evoking across the country-hundreds of thousands of volunteers are joining the “monsoon insect” from Ghaziabad and the Modi wave is being replaced by the Kejriwal tsunami.

Derisively dismissed as a Delhi phenomenon, the AAP is now being wooed in Kerala, Tamil Nadu, Maharashtra, UP, and by the Left.

The Congress has already lost the 2014 elections. Till a month ago the BJP and Modi were the clear favourites, but Delhi has changed all that. Kejriwal has stopped the Modi juggernaut not just in Delhi but across the country-there is now a real possibility that the NDA will fall well short of the 200 mark. Here are some facts:

It is a distinct possibility that the AAP shall capture 30-35 seats in Parliament ( seven of them shall come from Delhi itself, given the manner in which the BJP is demonstrating its pettiness there, nitpicking on a daily basis on the nature of Congress support to the AAP, allotment of houses and cars to the new Ministers, wild allegations of money-bags brokering deals to form the AAP government – being a bad loser is one thing, but being a stupid one is worse.

The BJP is just refusing to learn any lessons from its humbling in Delhi. And matters for the BJP can only get worse, once Kejriwal starts digging into the alleged corruption in the four Municipal Corporations). These seats can only come at the cost of the BJP to whom they would have gone had there been no AAP in the fray. If this happens it will seal the fate of Modi and the BJP.

With 30 or so seats in Parliament, AAP may well be the single largest party outside of the big two. To my mind, it will then become the natural choice to head the Third Front for three reasons.

First, it will be the only party from this group to have a truly national footprint, all the others being one state wonders: being far more representative of the nation, the AAP will have a greater claim to head a national coalition government.

Second, AAP does not yet have the inter-party baggage of mutual rivalries and competing egos that the others carry: Jayalalitha and Karunanidhi, Mamta and the Left, Mulayam and Mayawati, Nitish and Lalu. It will therefore be easier for these worthies to extend support to Kejriwal than to any one of each other.

Third, the groundswell of support for Kejriwal will only grow ( just as it had for Modi) forcing the other leaders to fall in line. With 30 seats in the the AAP’s bag the people of India would have found an alternative to the BJP and the Congress.

Arvind Kejriwal as Prime Minister of India?
In 2008 people were asking: Barack Obama as President of the USA?
Res ipsa loquitor.