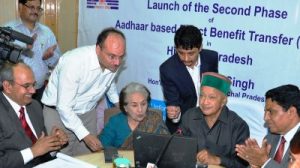 Launching the central government scheme here, the chief minister said six out of 12 districts – Hamirpur, Bilaspur, Una, Solan, Kullu and Mandi – have been covered in the second phase.

“Rs.8.25 crore would be transferred to bank accounts of 9,189 people under various government benefit schemes,” he said.

Virbhadra Singh said 83 percent of the state’s population of 68,64,602 had been issued Aadhaar cards.

The first phase of the direct benefit transfer scheme was introduced in the state in January.

Officials said Rs.2.16 crore have been deposited in the bank accounts of 8,452 beneficiaries in the first phase.