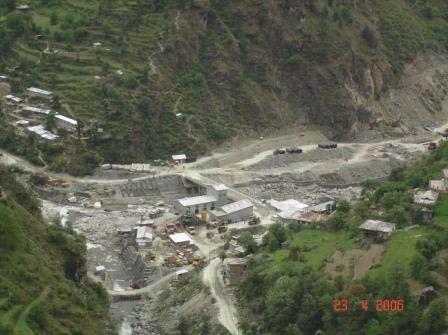 In order to harness Himachal Pradesh’s projected hydro-electric potential of 20,000 MW, it is envisaged to have 450 big and small hydro-electric projects in the three major river basins of Beas, Ravi and Sutlej.

This pursuit for power has accelerated the construction of hydro-electric projects in the remotest of valleys each with its own set of roads, tunnels, power houses and transmission lines. In such a scenario, monitoring of environmental parameters for these projects is a crucial mechanism for ensuring the health of the local ecology and sustainability of local life support systems. This study tries to examine the diligence with which environmental and forest clearance conditions are being monitored during the construction of the 800 MW Parbati Hydro-electric Project II, one of the large projects in the state.

1. WHAT IS THE PROJECT?
The National Hydro Power Corporation (NHPC) Ltd is presently in the process constructing the Parbati Hydro Electric Project (PHEP) Stage II (4 x 200) MW in Kullu District of Himachal Pradesh. The project involves the construction of a 91 meter high concrete diversion dam on the Parbati River at Pulga, about 49 kilometers upstream of its confluence with Beas River. A 31.23 Km long concrete headrace tunnel on the left bank of the Parbati River conveys the water to a surface power house located on the right bank of Sainj River which is also a tributary of the Beas River.

This project has gone through the process of seeking environment clearance (EC) as per the Environment Impact Assessment Notification, 1994. It has simultaneously been granted forest clearance for diversion of forest land for non-forest use as per the procedures laid down under the Forest Conservation Act, 1980.

The EC for the project was granted on 4th June 2001 specifying a detailed set of Special and General Conditions. It was stated while providing EC that no population will be displaced due to this project. The EC letter states that the forest clearance for diversion of 87.795 ha forest land was issued on 11th August 1999.

According to the NHPC website, for the purpose of the PHEP, the flow of river Parbati has further been augmented by utilising the water of Jigrai Nala2, Hurla Nala and Jiwa Nala by constructing trench weirs, de-silting works, interconnecting feeder tunnels and drop shafts (see figure 1 below). This water is adequate for running the power house at its full installed capacity for four hours even during the lean periods (http://www.nhpcindia.com/english/parbati2.htm).

The website also adds the project will generate 3108.66 Million Units in a 90% dependable year and the power generated shall be fed into the Northern Grid. The Project is proposed to be operated as a peaking station. The project has been approved by the Government for an estimated cost of Rs. 3919.59 crores at December 2001 price level. The Project is under active construction stage and is scheduled to be commissioned by September, 2009 (ibid). When clearance was granted, the project was proposed to be completed by September 2007. 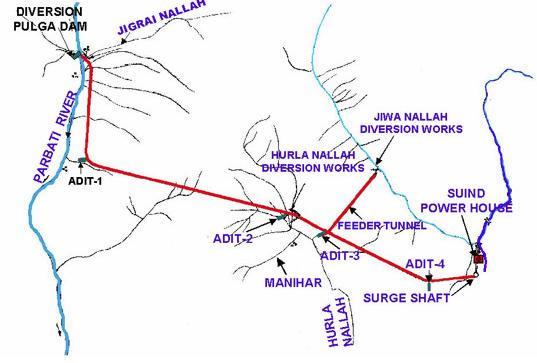 2. THE EC PROCESS AND MONITORING
As of 1994, all river valley and hydro electric projects3 needed to seek mandatory environment clearance as per the procedures laid out under the Environment Impact Assessment (EIA) Notification issued under the Environment Protection Act, 1986. While granting EC, the nodal impact assessment agency i.e. the Ministry of Environment and Forests (MoEF) puts down a set of conditions based on which clearance is granted. In the case of river valley and hydro electric projects like PHEP, these conditions include parameters around muck/debris disposal, road construction, catchment area treatment, fuel supply to labourers, conservation efforts etc. These conditions are to be mandatorily adhered to by the project authority; in this case is NHPC, and its sub contractors.

Therefore NHPC needed to submit six monthly compliance reports to the MoEF. The Northern Region Office (NRO) of MoEF, situated at Chandigarh, needed to regularly monitor the compliance/adherence of these conditions by NHPC, along with independent field verification. Notices can be issued, and cases filed against the project authority by NRO in case the conditions are not complied with.

In case an area involves the diversion of forest land for non-forest use, as in the case of PHEP II, the project authority also needs to seek forest clearance (FC) from the MoEF. The FC is granted with another set of conditions, the compliance of which is monitored by the State Forest Department. Both the FC and EC are provided by different divisions within the MoEF.

In addition to this the State Pollution Control Board independently monitors the conditions and requirements laid out while granting consent under the Water (Prevention & Control of Pollution) Act 1974, Air (Prevention & Control of Pollution) Act 1981.
[Note: The purpose of this case study is to primarily look at the compliance and monitoring of the EC conditions. However the monitoring carried out by the other agencies like the Forest Department and State Pollution Control Board provide substance to the arguments and observations around non compliance of the EC conditions.]

NRO Monitoring: Lack of Capacity, Procedures and No Surprise Checks

In response to a Right to Information application filed by Rahul Saxena, the response received on September 17th 2007 states, â€œThe thumb rule applicable to all Regional Offices of MoEF is that all projects accorded Environmental Clearance should be visited ONCE A YEAR. However highly polluting industries as identified by CPCB are to be monitored twice a year. This office has/had only TWO field officers for inspection of projects to monitor environmental compliance conditions in our jurisdiction against sanctioned posts of FOUR. Hence project visits are done barely once a year.â€

t further adds, â€œthe authorities, NRO, MoEF do not make surprise visits for monitoring the projects, however this office participates with the concerned Zonal office of Central Pollution Control Board (CPCB) for joint surprise visits based on units shortlisted by MoEF HQ and CPCB HQ.â€ The list provided by the NRO of such shortlisted units consists only of chemical and pharmaceutical units.

he documents for PHEP II indicate that no such surprise checks have happened.
The same letter indicates towards a complete lack of procedures prescribed by MoEF for its inspecting officers.

4. COMPLIANCE OF ENVIRONMENT CLEARANCE CONDITIONS AND RELATED IMPACTS
[Note: This section does not look at all the conditions (specific and general) as laid out in the EC letter but provides details of non-compliance on a few critical ones and violation of relevant Acts. This non-compliance has lead to irreversible ecological damage in the project area but ironically the project continues to be constructed with violations and non-compliance rampant. These violations have been observed in the MoEF’s own monitoring records and those of GoHP’s agencies including HPSEPPCB and HPFD. This has also been verified by researchers through field visits and interviews.]

When it comes to a run of the river project like PHEP-II, there is extensive generation muck and debris, both through 31.23 Kms of tunnelling and 88 Kms of road construction, which are the two major components in the construction of the project. The disposal of this muck and debris needs to be done at designated dumping sites identified in the EIA and EMP. These dumping sites need to have proper breast and crate walls (which need to be maintained regularly) in order to check the spillage of the muck down the slope and into the rivers. The muck has to be dumped at these sites in a way that 23-30 cm thick layer is formed and the dumping sites have to be levelled and restored once filled to capacity. While the EIA and EMP of the project identified an initial set of dumping sites and the quantum of the muck that would be generated (27.68 lakh cubic metres as per the EMP), NHPC and monitoring agency letters indicate the complete inadequacy of these dumping sites. Over the last 7 years, there have been instances where it has been reported that dumping sites have been filled to full capacity, and additional sites have to be allotted/procured. In practical terms this implies acquisition of more land (often agricultural and forest land) by NHPC. Many instances of illegal and unscientific dumping have also been recorded. Improper muck dumping assumes enormous significance since the dams of two power projects are situated in close downstream vicinity of the PHEP. The retention capacity of their reservoirs is bound to diminish due to the flushing of muck/debris from the activities at PHEP.

Further, the EC conditions for PHEP clearly state, that restoration of construction area including dumping sites of excavated materials at dam site should be ensured by levelling, filling up burrow pits, landscaping etc. It needs to be â€œproperly afforestedâ€ with suitable plantations.