Chief Minister said that efforts would be made to introduce Information Technology education in all the government degree colleges and government senior secondary schools which have enrollment of above 600 students from 9th standard to plus two level. He said that it would be a step towards fulfillment of the poll promise made with the people of the state in the Election Manifesto of the party in power.

Chief Minister said that the launch of the HIMSWAN project would bring about efficiency, transparency and responsiveness in the functioning of all the government units down to the gram panchayat level. 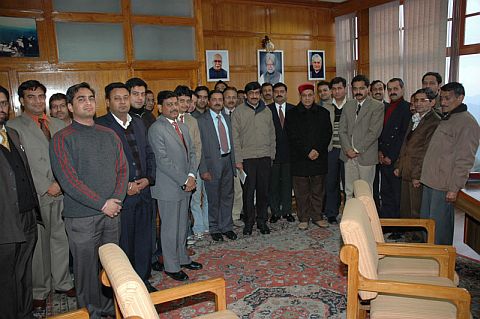 CM said that with the availability of the voice and video through HIMSWAN would further reduce travel time and expenditure consumed in grievance redressal and in passing information and directions to quarter concerned.

Prof. Dhumal said that 50 Sugam Centres had been set up all over the state delivering citizens and business to citizen services under single roof. He directed the deputy commissioners to ensure delivery of services on the same day. He further said that proposed 3,361 Common Services Centre being set up in the state, would be required to electronically transmitted application processing immediately while the services could be delivered on procurement of the required supporting documents. He said that people were showing desire by paying IT enabled service charges for prompt deliver of required services being delivered by already established 59 Citizen Service Centres. He directed the deputy commissioners to clear the backlog of mutations latest by 31st March, 2008 and also comply strictly with the revised process flow of mutation. He said that he would personally be conducting the periodic review of the IT projects in various departments.

Ravi Dhingra, Chief Secretary, said that proposed IT Park near Waknaghat would generate employment to about 25,000 persons besides providing 2600 dwelling units for IT professionals at different levels and workers. He said that Rs. 3.63 crore were being spent on procurement of hardware and allied equipments in 26 degree colleges to impart computer training to all the students running professional courses.