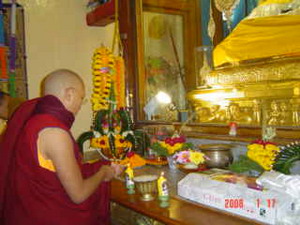 Mecloedganj( DHARAMSALA): It is time again for Tibetans around the world to celebrate their Losar; Tibetans and a section of Buddhists around the world will celebrate Losar on Thursday, February 7, 2008. The celebration normally lasts for three days, and it all means time for greetings, togetherness and abundant festivities, and time for prayers as well.

The word Losar is a Tibetan word for New Year. LO means year and SAR means new. The celebration of Losar can be traced back to the pre-Buddhist period in Tibet. During the period when Tibetans practiced the Bon religion, every winter a spiritual ceremony was held, in which people offered large quantities of incense to appease the local spirits, deities and protectors. This religious festival later evolved into an annual Buddhist festival which is believed to have originated during the reign of Pude Gungyal, the ninth King of Tibet.

The festival is said to have begun when an old woman named Belma introduced the measurement of time based on the phases of the moon. This festival took place during the flowering of the apricot trees of the Lhokha Yarla Shampo region in autumn, and it may have been the first celebration of what has become the traditional farmers’ festival. It was during this period that the arts of cultivation, irrigation, refining iron from ore and building bridges were first introduced in Tibet. The ceremonies which were instituted to celebrate these new capabilities can be recognized as precursors of the Losar festival. Later when the rudiments of the science of astrology, based on the five elements, were introduced in Tibet, this farmer’s festival became what we now call the Losar or New Year’s festival.

The calendar is made up of twelve lunar months and Losar begins on the first day of the first month. In the monasteries, the celebrations for the Losar begin on the twenty-ninth day of the twelfth month. That is the day before the Tibetan New Year’s Eve. On that day the monasteries do a protector deities’ puja (a special kind of ritual) and begin preparations for the Losar celebrations. The custom that day is to make special noodle called guthuk. It is made of nine different ingredients including dried cheese and various grains. Also, dough balls are given out with various ingredients hidden in them such as chilies, salt, wool, rice and coal.

The ingredients one finds hidden in one’s dough ball are supposed to be a lighthearted comment on one’s character. If a person finds chilies in their dough, it means they are talkative. If white-colored ingredients like salt, wool or rice are inside the dough it is considered a good sign. If a person finds coal in the dough it has much the same meaning as finding coal in one’s Christmas stocking; it means you have a “black heart”. 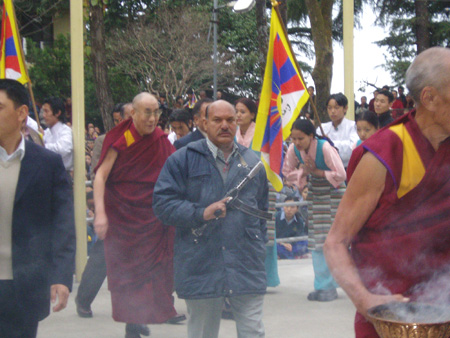 The last day of the year is a time to clean and prepare for the approaching New Year. In the monasteries it is a day of preparations. The finest decorations are put up and elaborate offerings are made of called “Lama Losar”. In the early dawn of this day, the monks of Namgyal Monastery offer a sacrificial cake (Tse- tor) on top of the main temple (Potala in Tibet) to the supreme hierarchy of Dharma protectors, the glorious goddess Palden Lhamo. Led by the Dalai Lama, the abbots of three great monasteries, lamas, reincarnated monks, government officials and dignitaries join the ceremony and offer their contemplative prayers, while the monks of Namgyal Monastery recite the invocation of Palden Lhamo. After the completion of this ceremony, all assemble in the hall called Excellence of Samsara and Nirvana for a formal greeting ceremony. Seated on his or her respective cushions, everyone exchanges the traditional greeting, “Tashi delek”. In order to wish the His Holiness the Dalai Lama good luck for the coming year, consecrated long-life pills (tse-ril) made out of roasted barley dough are offered to him by the representatives of the three great monasteries, the two Tantric Colleges, etc. Then entertainers (garma) perform a dance of good wishes. And two senior monks stage a debate on Buddhist philosophy, and conclude their debate with an auspicious recitation composed especially for the event, in which the whole spectrum of Buddhist teaching is first briefly reviewed. A request is made to His Holiness and to all holders of the doctrine to remain for a long time amongst beings in samsara in order to serve them through their enlightened activities. The official ceremony of the day then concludes with a ceremonial farewell to the His Holiness, who then retires to his palace.

The second day of Losar is known as King’s Losar (gyal-po lo-sar) because officially the day is reserved for a secular gathering in the hall of Excellence of Samsara and Nirvana. His Holiness and his government in Dharmasala exchange greetings with both monastic and lay dignitaries, such as representatives of China, India, Bhutan, Nepal, Mongolia and other foreign visitors.

Then from the third day onwards, the people and monks begin to celebrate and enjoy the festive season. In Tibet before the Chinese came, Losar had been celebrated for fifteen days or more.