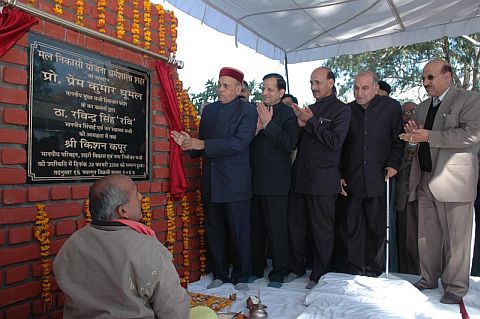 Shimla: Prof. Prem Kumar Dhumal today said that the sanitation conditions of urban areas are more worrisome than that of rural area and over 260 crore people in the world are in the habit of open defecation whereas the figure of the country also stood at about 70 crore.

Moreover, the unhygienic conditions resulting from poor sanitation is responsible in giving birth to various dreaded ailments, said Dhumal while addressing the members of panchayati raj institutions of district Kangra on the inaugural ceremony of the two-days workshop on Total Sanitation Campaign in the district organized by the District Rural Development Agency in collaboration with the World Sanitation Campaign at Dharamshala.

Chief Minister honoured the Pradhans of Gram panchayats Simbal Khoula and Saliana in Panchrukhi development block; Rehan and Jachh in Nurpur; Jaangal in Nagrota Surian; Kathgarh in Indoraâ€™ Haar and Pragpur in Pragpur; Ban Ghiyar in Bhawarna which had been recommended for inclusion in the recommendations made by the state in the list of 454 gram panchayats for â€˜Nirmal Puruskarâ€™ of the Government of India. He also announced a grant of Rs. 5000 to the Kala Jatha which presented a message giving cultural programme about the campaign on the occasion.