I guess it was bound to happen sooner rather than later, given the country’s appalling sex ratio and the increasing number of rapes. It appears that the country is running out of girls to rape and, in the true spirit of the Start Up India campaign, going in for innovations and diversification with some political parties providing the venture capital. It is entirely appropriate that a beginning has been made in Haryana which has probably the lowest sex ratio in the country – 834 girls for every 1000 boys. I refer, of course, to the news reports last week of six men having been arrested in that blessed state for having forced and “unnatural sex” with a she goat.

The state govt. has promised to build a wool-proof case against them but I have my doubts. For one, the police have not been able to record the victim’s statement (a crucial piece of evidence) because, when asked to name the accused, all it says is “Baa-Baa”. The usual prime time panelists have opined that this will not stand up in court because India, at last count, had 25 million Babas including Baba Ramdev and Baba Asa Ram. Identification, therefore, shall be a major problem: the ID parade would dwarf the Republic Day parade. Second, the accused will certainly claim that the sex was consensual, that the goat had opted for what is nowadays known as strategic promiscuity: a romp with these lusty lads instead of an appointment with the butcher. This is a reasonable defence, since such trade offs are common- nay, a sine qua non – in all walks of modern life : in films, politics, corporates, police stations, even in universities. As the blonde advised the neophyte: If you wanna go up, baby, you gotta lie down. Moreover, the suspects are also claiming that the goat specifically nodded its head when they popped the question to it. The fact that goats are always nodding their heads does not weaken this defence: a Delhi High Court judgement last year had laid down that the lack of consent has to be conveyed with a loud, unequivocal NO, otherwise consent has to be presumed. (Please refer to my earlier blogpost : FIFTY SHADES OF NO). Nodding and bleating certainly does not convey this sense of rejection. And finally, of course, there is the issue of “corpus delicti” i.e. the goat itself which has to be produced before the court. I have it on good authority that it was converted into mutton biryani in the police station, and washed down with some of the impounded liquor borrowed from Bihar, kept for just such an occasion. No victim, no case, your honour. I suspect that the six accused will be released very soon and publicly garlanded: it was a goat, after all, not a cow. 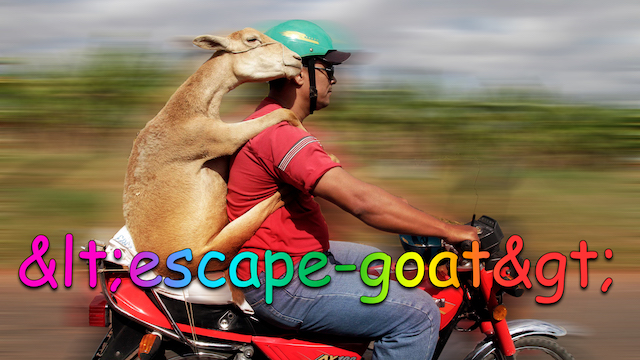 But wait! There is another defence for the accused if the judge happens to be a learned JNU type, steeped in history. These days in India, legal provisions and scientific evidence are of no avail when confronted with mythology: the latter prevails over everything. And on the basis of mythology the accused can claim that sex with the goat was not unnatural, but par for the course. Ancient Greek and Roman mythology abounds with references to the goat as a lascivious, promiscuous, over-sexed, lecherous animal. Part of the retinue of Dionysus, the god of fertility and merry making, it frequently caught hold of nymphs in forest glades and had sex with them. Their offspring were the fauns and satyrs of fables, half goat and half human being. Shepherds, miles away from GB Road and Sonagachi, had to make do with ewes (hence the French word for “yes”- oui). There is even a fable related by the unhappily named Aelianus which records that the alpha billy goat of a flock, in a fit of carnal possessiveness, was so angered by this encroachment on its territory that one day he butted the shepherd to death over a cliff, literally nipping the problem in the butt, as it were. Even the immortal Picasso was so impressed with the goat’s raunchy reputation that they are a constant theme running through his works – sketches, paintings, sculptures. He even kept a goat as a pet and used it as a model. One of his most famous sculptures – Le Chevre – is that of a goat, as too one of his better known canvases – Girl With a Goat.

Mythology, therefore, will be a stout defense to establish that sex between man and goat is sanctified by history and culture, that the antecedents of the goat establish that it is a lecherous animal, that it is fairly eclectic in its choice of sexual partners, and that what the six did was neither unnatural nor non-consensual. They were only continuing with the transhumant traditions of yore. They simply gave back what their female ancestors had goat – sorry, got.

They will, of course, be acquitted by our benevolent legal system, just as 76 out of 100 rape accused are as per NCR data. But I am still bothered by two questions. Will these six Haryanvi stalwarts henceforth be known as Mutton Buggers ? And if by some chance the goat had managed to escape their clutches, would it have been termed an Escapegoat? Maybe some of my readers can enlighten me, or else I shall have no other option but to approach Mr. V. Raja, the acknowledged escapegoat in the 2G case, for a byte or at least a nibble.