In our days there was never any doubt when a woman said “No.” In fact she rarely had to articulate these dreaded words: the rejection was usually conveyed by a very visible rubbing of Amrutanjan on her forehead to indicate she had a headache, or by a burnt chapati flung on to the dinner plate from five feet away. It didn’t need a learned High Court judge to interpret it. But times have changed and things appear to have become much more difficult for women today. According to last week’s order of the Delhi High Court in the Farooqui rape case, saying “No” is no longer enough- it has to be uttered through a public address system, loud and clear: a “feeble” No amounts to consent. Even worse, this bizarre judgement even contrives a strange alibi for any future rapist when it states that “…and if it was without her consent, whether the appellant could discern/understand the same.” Not only should the beast have HEARD the “No” clearly, he should also have UNDERSTOOD it.  This raises some important questions.

What if the hapless lady is by nature a soft spoken person, not given to raising her voice? What if she has laryngitis? What if the rapist is deaf and can’t hear her? What if a a potential rapist, well versed in the laws of the land, covers her mouth and thus preempts her from saying anything at all? What if the guy has an IQ in the lower double digits, or is sozzled upto his eyebrows, and cannot understand a “No” ?  To extend the strange logic of the court, which appears to be based more on the principles of acoustics rather than that of jurisprudence, what if the assaulter speaks a different language from that of the assaultee ? The former can then claim that he never understood her “No” and mistook it for a “Yes”- for example the Russian ” Nyet” (No) can sound very much like an English “Not yet” to a guy from Liverpool or Rohtak. This would no doubt entitle our courts to rule that what the lady was suggesting was a deferment and not a rejection: he could then be charged with premature ejaculation rather than rape, I suspect, a much lesser offence. And instead of going to jail he’ll be packed off to Baba Ramdev’s ashram for a four week course of pranayam: I’m told “kapal bharati” can do wonders for this ailment- it doesn’t do much for the urge, but controls the surge. 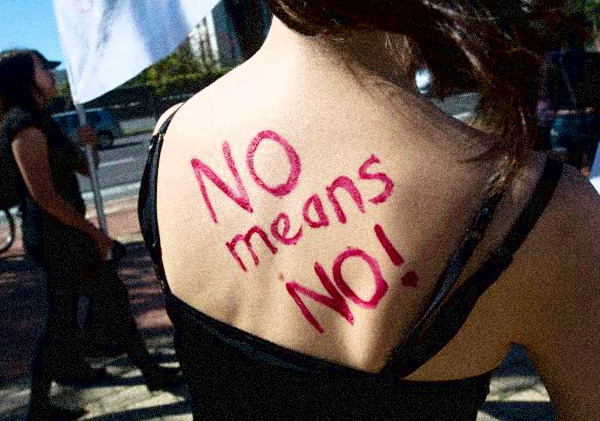 Why do our judges have to complicate simple things just in order to show off their erudition? Why does a woman have to say anything all, other than ” F*** OFF.” ? Simple logic dictates that, for a lady faced with this terrible situation, the assumed default option should be a “No”. The legal principle for this is the same one that stipulates that a person is presumed to be innocent unless proved guilty. Similarly, in a rape case it should be presumed that the victim said “No” unless the accused can prove that she gave her specific consent to the act. And naturally, the consent has to be conveyed through a loud ” Yes.” For a feeble YES will amount to a NO, right ? Wrap your head around this one, my lord.

The sooner this judgement is consigned to the shredder by the Supreme Court, the better for our women.

Ever since we crawled out of the primeval sludge philosophers, religious leaders and Hugh Heffner have been trying to find the secret of happiness (Heffner came closest to it), without any success. The search is now over. Our very own Mr. Shivraj Singh Chauhan, the Chief Minister of Madhya Pradesh, has found the path to this holy grail- establish a Department of Happiness! Known as Rajya Anand Sansthan, it was set up in 2016 and has 33000 volunteers statewide. They are  designated as Anand Sahyogis and Anandaks; their job is to spread joy by hugging people, giving up a seat on a bus for someone else, surrender one’s parking space, cook for the neighbours, talk to strangers, take the sick to hospitals, etc. Naturally, therefore, the volunteers are a miserable lot, especially as they haven’t been paid anything, and find it easier to spread butter on their toasts than happiness across the state.

Mr. Chavan suffers from the same ailment as his big boss – QFD: Quick Fix Disorder. If happiness could be spread by state diktat then North Korea and Uganda would be the happiest places on earth. The Chief Minister should consider how bad things are in his fiefdom before he begins to wonder why his new department is stillborn: 23 million people in MP are still below the poverty line and don’t get even two meals in a day; it has the highest IFR ( Infant Mortality Rate) in the country at 52 per 1000 live births; 42% of children under the age of five are stunted and 42.8% children are underweight; the state records 14 rapes everyday; 21000 farmers have committed suicide since 2001 and continue to die at the rate of 3 per day. And we are not even speaking of Vyapam, gau rakshaks and Mandsaur.

Mr. Chief Minister, the quickest route to a peoples’ happiness is good governance and personal integrity in leaders. As Bhutan has shown, take care of your people, set a personal example, protect the natural environment, respect the law, be tolerant towards all- and happiness will take care of itself. If things are right it will come uninvited, but it cannot be ordered to appear in a command performance.

Why can’t Mr. Modi’s govt. leave well alone ? Why does it have to tinker with the economy every other day and make things more difficult for people who are trying to earn an honest day’s wages? I allude, of course, to the govt’s latest order that all cigarette shops have to register with the local authority and that they can sell nothing else – no cold drinks, chips, biscuits, toffees. The hare brained idea behind this is to ensure that youngsters do not go to these shops: they might be tempted to buy a cigarette or two along with the candy, you see. Only a certified lunatic could have come up with this idea, and I’ll tell you why.

I buy my cigarettes wholesale from a distributor in Bengali Market (Delhi), from where the retailers also buy them. The retail price for a pack is Rs. 36.00 (okay, okay, so I’m a cheapskate!) and I get it for Rs. 34.50. So the cigarette wallah on the corner gets Rs. 1.50 margin on a pack; that is a profit of 3% only. No business can survive on such a low margin, and so the poor guy also sells those other things govt. has now banned- he makes his paltry income from these items, not the cigarettes. So now he’ll be forced to close shop, or increase the bribe he already has to pay up to the local police and Corporation inspectors. Does this make any sense ? The present govt. has already severely damaged the unorganised and small trader sector with demonetisation, it has dealt a crippling blow to SMEs and exporters with GST, it has almost wiped out the Rs. 25000 crore “beef” industry with its Cattle Rules and gau rakshaks, it has raised unemployment figures to historical levels. Why, for God’s sake, does it now want to render millions more unemployed? If a kid wants to buy a cigarette he can do it just as easily as when he buys a condom, whether or not it is placed next to a strategically located and unhappily named packet of ” Lays” chips!

There is far too much intrusion by this govt. into the daily lives of citizens. In his effort to appear dynamic, innovative and reformist Mr. Modi is trying too hard and making us miserable. Maybe he should take a break. Learn something from his buddy Arvind Kejriwal and go for a Vipassana course. And oh yes! Please take Mr. Jaitley with you, sir.