Manali: Faulty design and indifferent attitude towards the public demand has ruined the whole structure of Manu Rangshala, an open air historical theatre, where view of the stage has been obstructed by huge steel pillars and authorities have put a full stop on all possibilities of expansion of the theatre to increase seating capacity.

The actual proposal was to build a double-decker theatre to double its seating capacity or dismantle its round shape from one edge and built more seats in straight line. Increasing seating capacity of Manu Rangshala has been one of the serious demands of people of Manali for last eight years. Municipal council Manali was also showing interest in its expansion but the work has now been transferred to public works department which has ruined the design. Instead of double-decker seating arrangements, a roof is being built.

“We had given an idea of double-decker seating arrangements to Kullu deputy commissioner and other concerned persons. We also checked its feasibility and everything was almost finalized. Now the theatre is not being expanded and heavy steal is being used to prove roof which has decreased the seating capacity. Public will have to put extra effort to watch programmes on stage as pillars are hampering the view,” said Chaman Kapoor, a councillor from municipal council Manali.

Named after sage Manu, the Manu Rangshala built at historical Nehru Park of Manali has been witnessing various cultural programmes since decades. National level Winter Carnival is also organized here from January 2 to 6 every year. The theatre was given a new look few years back but its circular setting arrangements limited its seating capacity to nearly 1,500 only. Thousands of people come to see various programmes here but only a few gets entry. Both BJP and Congress CMs assured people to expand the theatre but erecting a large number of steel pillars from sitting area has decreased the seat capacity. 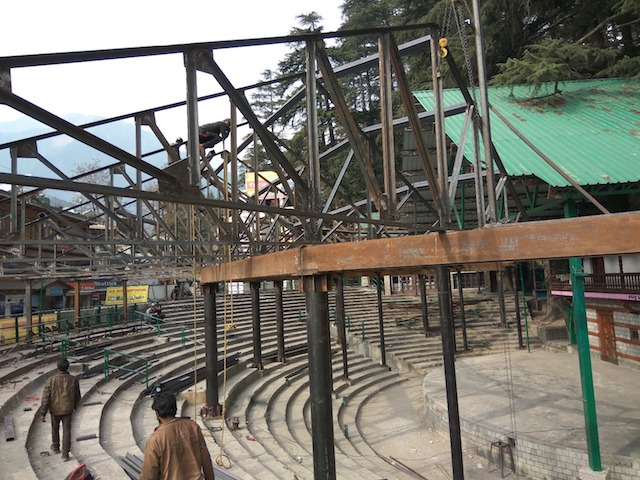 A large number of huge pillars have been erected from the setting area, right in front of the stage, which is obstructing the view of the stage. The pillars have occupied large space and decreased the seating capacity. There is no plan to expand the theatre and lakhs of rupees are being spent to cover the whole stage with a roof. The roof has a design that it will have slopes to two sides. After heavy snowfall, the snow will collapse on the shops and road in one side and the main stage on other side. If in future, there will be a plan to expand the Rangshala, damaging roof structure will be the only option.

Manali MLA Govind Singh Thakur said expansion of Rangshala was given principal approval and even funds were approved for the project but Congress government ruined everything. “Public has been demanding to increase seating capacity of Manu Rangshala for years. The plan was approved. But the current government is now ruining the Rangshala without caring for public opinion,” he said