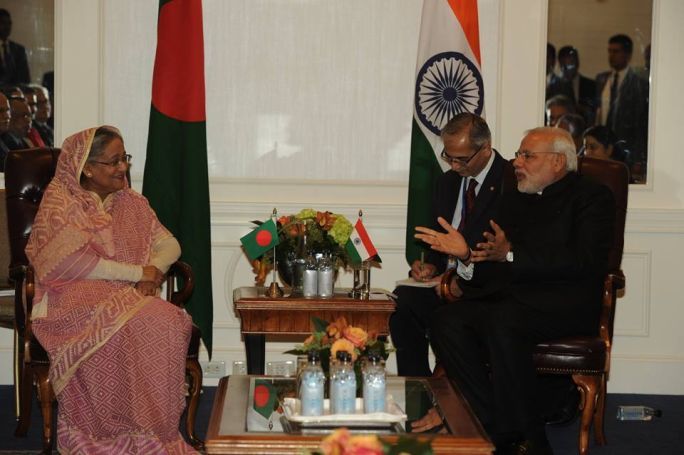 When Narendra Modi landed in Bangladesh last weekend, he was greeted by all the high and mighty of Bangladesh. Bangladesh Prime Minister Sheikh Hasina and all her senior cabinet ministers queued up to greet the Indian PM. For Narendra Modi, who, by now, must have gotten used to getting off the aircraft and being greeted by world leaders, this was the chance to take forward a historic relationship that has been facing blockades for the past four decades.

India’s relationship with Bangladesh is a classic case of a faulty and flawed foreign policy. It won’t be incorrect to say that Bangladesh owes its existence to India. Sheikh Mujibur Rahman, Bangladesh’s first PM and father of Sheikh Hasina, expressed his gratitude towards Indira Gandhi and “the best friends of his people, the people of India” for India’s role in Bangladesh’s liberation.

Yet somehow, we have been not been able to develop sweet relations with Bangladesh due to long unresolved issues. While Bangladesh ratified it in 1974 itself, the Indian Parliament could only ratify it last month. The conclusion of the deal would lead to transfer of 51 enclaves to India and 111 enclaves to Bangladesh, with the residents of these enclaves getting a choice to become acitizen of either nation.

To give a further push to the newly revived diplomatic ties, Modi extended a $2 billion line of credit to Bangladesh and flagged off a Bus service from Dhaka to four Indian cities. Additionally, two of Modi’s frequent travel companions, Ambani and Adani pledged to invest over $5 billion in Bangladesh’s power sector. While steps such as these would undoubtedly play a major role in sweetening our ties, the PM overlooked an extremely significant thorn in the relationship between the two countries – the issue of illegal Bangladeshi immigrants.

A porous Indo-Bangla border gives ample opportunities to Bangladeshi citizens to cross over into India and mix up with the local villagers. Despite a strict vigil by the Border Security Force (BSF), lack of adequate resources at their disposal means that each year, a considerable number of Bangladeshis manage to cross the border with the help of dalals(agents).

Data published by the Ministry of Home Affairs in 2012 showed that 16,530 Bangladeshi residents overstayed in India after the expiry of their permit. These are just the official numbers and highlight the Bangladeshis travelling with valid travel documents. The illegal number is expected to be at least 1 crore.

The North East states and West Bengal have been bearing the brunt of this issue ever since Bangladesh came into existence. Though close to 85,000 BSF troops are stationed at the Indo-Bangla border, a highly difficult terrain gives enough opportunities to the dalals on both the sides to run their business.

Lack of job opportunities in Bangladesh is also forcing a number of young girls to take up flesh trade in India. Illegal brothels in Delhi, Kolkata and Mumbai are always on the lookout for such young girls coming from across the border.

Not such a simple solution!

The Indo-Bangla border divides the Ichamati River, which is guarded by the BSF. A number of brick kilns have come up by the side of the river owing to the highly fertile soil which supports brick making. Employment opportunities in these kilns attract illegal Bangladeshi immigrants in huge numbers. According to BSF, patrolling of the river is usually done by hired boats. A few speeding boats and three floating border outposts are the only supporting equipments that the BSF has at its disposal to control the thousands of immigrants looking to cross into India. Beefing up BSF’s resources, rather than long talks should be the first step towards arriving at a solution.

According to one of the agreements signed between the two nations, neither side can erect fences within 150 yards of the border. This makes the villages laying between the fence and the border an ideal breeding ground for smugglers. While the BSF has been constantly taking up the issue with the Government, the centre is shifting the responsibility towards the state Government and asking the force to convince the states. This kind of tick-tack with BSF doesn’t auger well for the future.

Modi forgetting his own words?

One of Modi’s major pre-poll promises was to send all the illegal immigrants back to Bangladesh. He carried on his form till November last year when as Prime Minister, he remarked, “I will make such an arrangement that all the roads that are today helping Bangladeshis enter and destroy Assam are closed.”

Last year in August, BJP announced the revival of an Action Plan of 2005 according to which, the states were asked to build detention centres for illegal Bangladeshi immigrants. For all the hard talks that our Government has done on the issue, there are only 7 such centres in the country (Assam-3, Delhi-2, one each in Gujarat and West Bengal).

Hoping for a domino effect?

Modi’sassumption that exchange of enclaves will strengthen the borders and stop illegal immigration has a number of flaws. For one, most of the illegal immigrants aren’t the citizens of these enclaves. India shares its largest International border with Bangladesh (4096 km) which runs through complex terrains including hills, forests, rivers and plains. In such a situation, infiltration proof borders would need much more than the land swapping deal. Sealing of borders isn’t the ideal solution to this decades old problem.

The year 2015 has already seen over 20 deaths of Bangladeshis by the hands of the Indian security forces. If this number is to be checked, both the sides must not bask in the glory of the Land Boundary Agreement for too long, and turn their attention towards this grave issue of illegal immigrants.