Drug abuse which  is corroding the foundations of our society, particularly the youth, contributes   to higher rates of domestic violence, child abuse and sexual violence and needs to be curbed stringently.  It exacts a significant toll, with valuable human lives and productive years of many persons being lost said Chief Minister Virbhadra Singh  in his inaugural address on occasion of three day Judicial conference on ‘Drug Menace in India, overview, challenges and solutions’ organised by HP State Legal Services Authority at Manali. 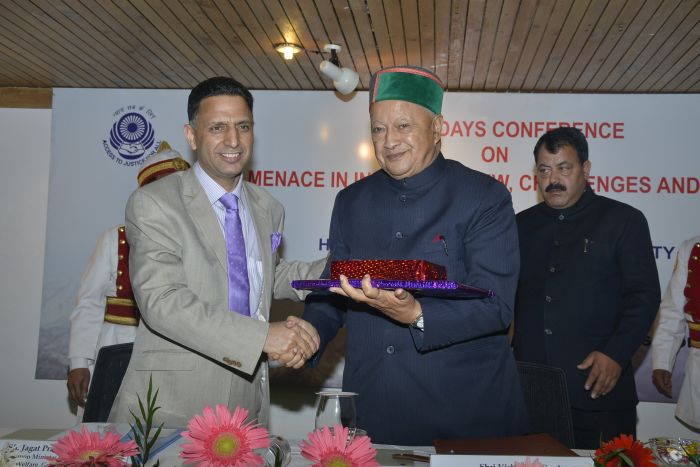 The Chief Minister said that the challenges posed by illicit drug trafficking   and abuse of drugs were  universal and India was no exception to this twin problem.

“Illicit drug business attracts criminal organizations because of the huge potential profits” he said, adding that online pharmacies indulging in illicit sale of pharmaceutical drugs through internet is major emerging problem nowadays which has to be countered effectively. “Elimination of a specific drug does not imply the complete elimination of the associated drug problem”, he said. 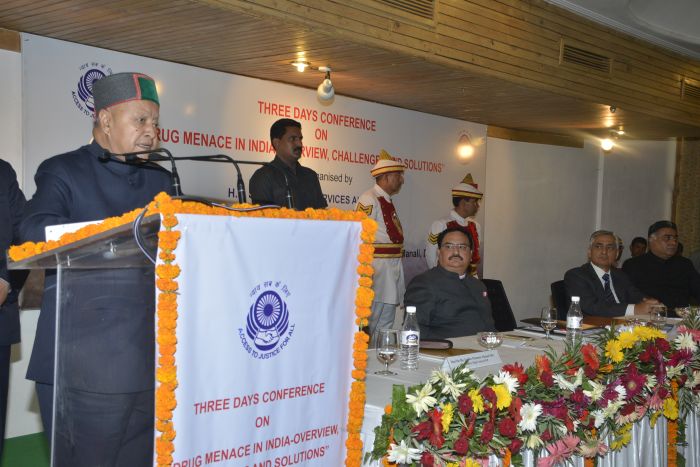 In order to effectively implement drugs demand reduction strategies, it is important that we have a clear idea of the magnitude of the problem of drug abuse, he said. “So far as  drugs supply reduction is concerned, we need to have a coordinated approach by  border guarding, intelligence and drug law enforcement agencies”, he said.

As far as Malana, which has become famous for producing high quality Cannabis in Kullu district  is concerned, the government is committed to make it drug-free, said the Chief Minister, adding that Malana though was a small speck in the world largest drug business. He said that our two generations of our youth in neighbouring State of Punjab are in grip of drug abuse and also asked the judiciary to decide the cases of master minds of drug business expeditiously and on priority basis so that it could be a lesson for others involved in drug business.

The enactment of Narcotics Drugs and Psychotropic Substances (NDPS) Act  to deal with problems of trafficking and abuse of drugs lays down stringent provisions for the control and regulation of operations relating to various narcotic drugs and psychotropic substances. Though, it also provides for deterrent punishments, including the death penalty and forfeiture of property of the criminals involved in illicit drug trade, yet even after 30 years of enactment of the Act, the problem continues to loom large. 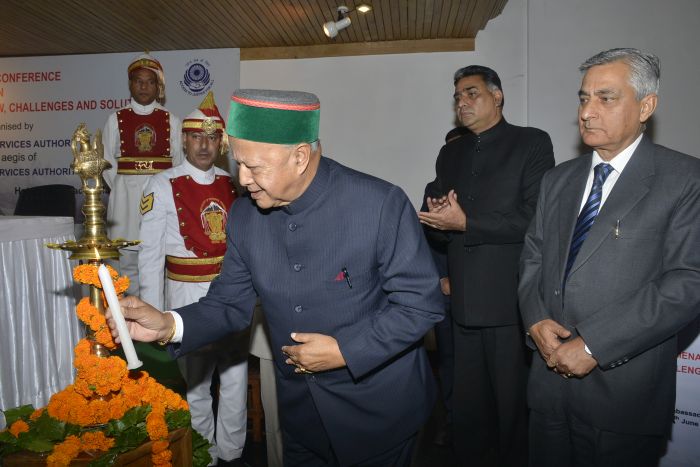 The Chief Minister said that our Government was committed to stamping out this menace and the enforcement agencies were  trying their best to keep up the pressure on drug pedlars and their tactics.
He said that now a days numerous national and international drug trafficking organizations have extensive access to sophisticated technology and resources to support their illegal operations posing great challenge to  our enforcement agencies.
Cannabis derivatives are the most easily and readily available illegal drugs in India, he said, adding that this crop was widely cultivated in many states, including Himachal Pradesh which needs to be curbed  by enforcing strict laws.
In Himachal Pradesh, our government has laid  lot of stress on spreading awareness of the risks of drug use.  We have involved various departments, NGOs, and members of the community for this purpose.  In the days to come, it would also be very important to leverage the opportunities provided by the internet and the social media to spread awareness about the ill effects of drugs on the health of our society, said Sh Virbhadra.
Virbhadra stressed upon Inter-agency coordination which he termed as the  most essential prerequisite for reduction in the supply of drugs. In this regard it is vital that the Central Government continues to coordinate the efforts and provide financial assistance to the States to strengthen their drug interdiction capabilities, he said.

Drug abuse does not happen in a vacuum. The environment has a profound influence on whether a person will start abusing drugs, he said. Attempts to deter drug use only through punishment are bound to fail because they do not address the complex causes of drug abuse, which after begin within the context of family problems.  “It becomes imperative herein that continuing, comprehensive aftercare in the community, forms an integral part of our strategy to combat the drug menace”, he added.. This would reduce the chances of relapse into the vicious cycle of drug abuse and crime. 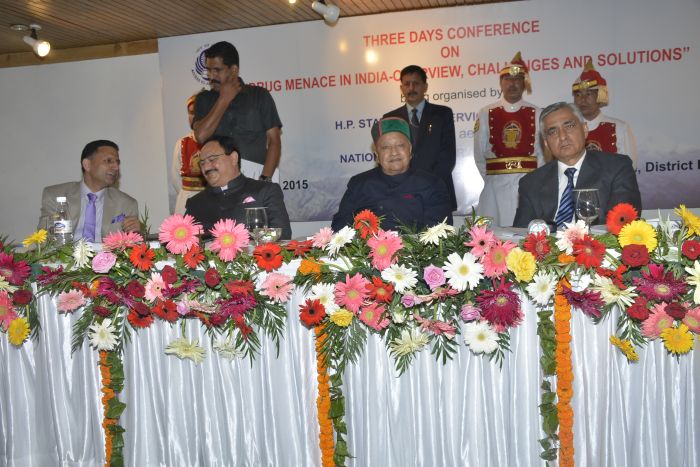 We have to remain steadfast, unyielding and inflexible in our opposition to drugs he added and while doing so, we must ensure that our strategies to fight the drug menace are comprehensive and the threat at hand can be countered only with a consistent, sustained, dedicated and a well-coordinated approach among all stakeholders.

Judge of Supreme Court Mr.Justice T.S Thakur,  while addressing the august gathering said that in HP the total number of cases registered as on 31st May, 2015, under NDPS  were 4366 and 871 cases alone in district Kullu  were  lying pending to be decided upon after district Mandi, and for the very reason we chose to hold this conference at Manali in Himachal Pradesh.

He said that it has been seen that insurgency and exodus brings very formidable challenges with them. Though, India is second most populist country in the world having 22 official languages, the dialects change after  every two kilometers. He said that as per reports 35 crore of population in coming times were likely to shift to urban areas in India in search of Jobs or otherwise  and all the urban issues pertaining to their rehabilitation needs to be addressed which includes their habits too. 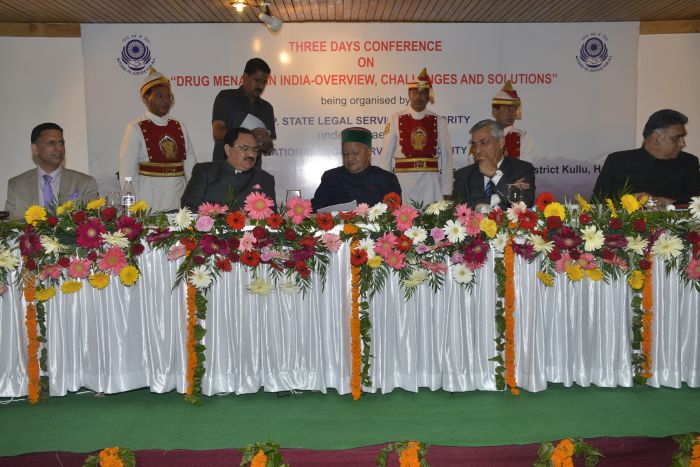 He stressed for abiding the law and the rules. India is a country where strict enforcement of laws are required he said. The people should respect law and the rules and then only we can form a civilised society.The Judiciary and any government needs to introspect that whether we were heading towards in right direction and doing justice to the people, he questioned.  He said that Drug Problem was a serious issue. 67 percent of population in Punjab were addicted to drug abuse, which was not good for a State which is known for its valour, he said.

Sh Thakur said that  if youth and labour class was addicted it was a alarm bell for we people to realise that the roots of the nation were being shaken. An unemployed jobless youth, a poor labourer is addicted, why not the intelligence agencies identify the main persons behind all the nexus.

Mr. Justice Rajeev Sharma,  Judge HP High Court welcomed the Chief Minister and Judges of Supreme Court. He also gave his view on the most burning topic of drug abuse.