Piku is a pleasant reminder of the movies that Hrishikesh Mukherjee used to make. It is a wonderful journey, where the director invites the audiences to tag along to witness firsthand the relationship between an aging parent and a single child.

The view that the movie manages to represent is a very real one. Most of us will be able to relate to it at some level for sure. There are no gyaan sessions in it, just a simple display of emotions that manage to pull your heartstrings.

The movie is an original and the director Shoojit Sarcar, deserves all credit for delivering something so unique. Let’s not forget this is the same man who had given us the delightful Vicky Donor too. This time he manages to base his comedy on constipation and actually manages to get away with it too. At no point in the movie will you feel that the movie is dragging or something was not required. The spin of the story is just perfect. 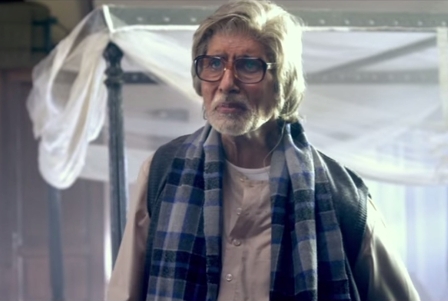 The dysfunctional family which is depicted has Amitabh Bachchan  playing the father – Bhaskor, who is a typical Bengali, 70 years old. Amitabh plays an over protective father, bubbling with life and witty comments. He actually travels with a ‘ commode chair’ and believes that women that get married are of low IQ. He actually manages to run away with the film and adds another milestone to his already glorious list of achievements. . His erratic bowel movements are the centre of conversation for all who know him. You also get to see Moushmi Chatterjee and she is as lovely and chirpy like before.

Mr. Bhaskor has a strong-willed independent daughter Piku, played by DeepikaPadukone. She’s a successful architect, but spends every waking hour looking after the needs of her aging father. Piku is Deepika’s finest performance. She has this knack for playing characters that are on an emotional high. The expression in her eyes can melt the coldest of hearts and force you to cry with her. She is an epitome of Indian beauty and exudes so much feminism even in a simple pair of jeans and t-shirt. How many leading ladies today have that quality? 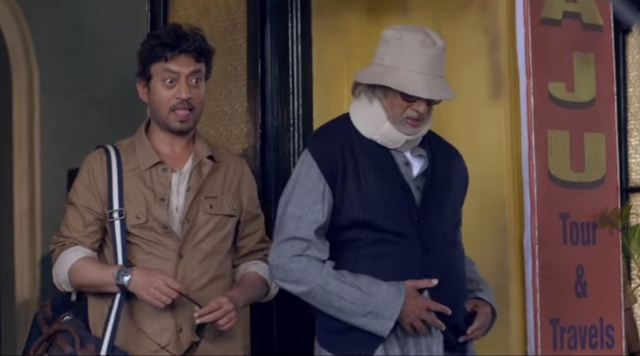 Although you would think that there is not much scope for a conventional drama over an old mans potty trouble. But that’s only on the face of it, with the likes of Amitabh and Irrfan Khan in the movie the movie is packed with humour, flashes of bathos and poignancy, which ensures that the audiences also enjoy the potty talk. The bouts of humor will make you smile long after you have left the theatre. Like for instance when a suitor is trying to impress Piku and her father declares that – Piku “is not a virgin” and “is financially and sexually independent”.

We can safely say that the role of Rana Chaudhary could not have been played better by any other actor except Irrfan Khan. The ease, with which he slips into a character and makes it believable, is something that the youngsters in the industry should learn. A lot has been written about his on screen chemistry with Deepika, but the movie needs to be seen in order to understand it.

Piku is not a romantic comedy. The possibility of the bond between Piku and Rana culminating into a full-blown love story stops well short, leaving the audiences guessing. The open question actually adds to the richness of the story. In the drama called Piku, not many bubbles will burst to the surface.

The driving force of the movie is its insightful writing, the dialogues and the screenplay by Juhi Chaturvedi and the deft directorial ability of Sircar, which is evident in every frame and every scene. The movie is bound to be a huge success also for the reason that it touches a very sensitive subject, which no director has ever paid heed to earlier. The issues related to ageing parents, medical transportation in India. There is a poignant scene in the movie where Amitabh explains in detail, the trauma of a patient who is put on a ventilator. The words seem to etch in your mind forever.

It is actually Deepika who is the binding force in the movie, and that too in a restrained yet believable manner. The confidence with which Irrfan plays this character can only be termed as pitch-perfect. A special mention of the Bengali composer, singer and writer Anupam Roy, his enchanting scores add to the emotional texture of the movie. His first Hindi movie by the way!

If you still need convincing go watch it for Irrfan’s wide-eyed, raised eyebrow sexiness, Deepika in her uptight with pursed lips version and Amitabh at his most delightful best.

Piku is an absolute watch!