SJVN holds an enviable reputation for having successfully harnessed a variety of renewable energy resources in India. Having made the most of hydropower by executing and operating India’s largest hydropower plant – the 1500 MW Nathpa Jhakri project, rising aspirations of the company have expanded to be a comprehensive power sector company player by making a foray into thermal power generation. The 1320 MW capacity Buxar Thermal Power project in Bihar is SJVN’s first thermal power venture.

To execute this large thermal power project, 4 July, 2013 SJVN took over Buxar Bijlee Company Pvt. Ltd, the previous owner of the project, and converted it into a wholly owned subsidiary by turning it into a special purpose vehicle (SPV) of the company. In the presence of the then chief minister of Bihar, SJVN entered into a memorandum of understanding with Bihar State Power Holding Company Ltd for executing the thermal plant project on 17 January, 2013. The upcoming power plant is to be located at Chausa village of Buxar district. 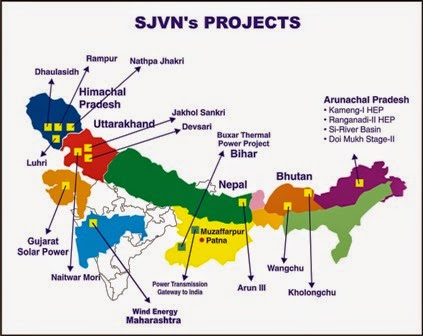 The plant is to have two coal fired turbines of 660 MW capacity each and working at a plant load factor of 85% the thermal unit is estimated to generate 9828 million units of quality power annually. To ensure uninterrupted supply of coal for the planned plant, the Government of India has already allocated a dedicated coal mine to SJVN that is located in Birbhum district of West Bengal. Targeted to be commissioned in 41 months after work begins, the Chausa power plant at May 2008 prices was billed to cost INR 6791.36 crores, with the power tariff working out to Rs 2.37/kwh for the first year and for each year thereafter at Rs 2.59/kwh as the levelized tariff.

The Buxar plant will augment the power requirements of an energy deficient of Bihar, enabling the large state to become energy efficient and independent of external assistance in meeting its power requirements. The plant is to function on a build-own-operate basis as a supercritical power station.  SJVN is committed to provide the Bihar State Electricity Board (BSEB) with 85% of the total electricity generated and the remaining power would be sold as merchant power in open markets.

Land: For meeting the 1167 acres of land required to set up the plant, the District Land Acquisition Officer of Buxar has already issued a certificate of possession of private land for 1048.72 acres to Central Electric Supply Area – Patna, who are the authorized signatories for the land acquisition process. Other than that the Bihar government by way of a cabinet decision approved the diversion of 13.34 acres of government land for the project. The land is with SJVN and Project Offices have been set up at Patna and at the plant site in Buxar.

Water: To meet the 62.5 cusecs of water requirement for operating this big plant, SJVN has already been allocated utilization for 56 cusecs from Water Resources Department of Bihar as well as the Central Water Commission, headquartered at Delhi. The River Ganges will be the main source for meeting the water supply requirements.

Coal: The ministry of coal, government of India in July 2013 allotted the Deocha Pachami coal block in Birbhum district of West Bengal to SJVN. This block will cater to meeting the needs of operating the Buxar supercritical thermal plant. To make enough provisions about availability of sufficient coal stocks, SJVN is also negotiating with other domestic and international suppliers of coal for operating the plant.