Shimla: Diversifying out from hydro power and wind power generation, SJVN on Thursday entered into a memorandum of understanding (MoU) with Bihar government for setting up a 1320 MW thermal plant at Buxar in Chausa.

The MoU was signed between RP Singh CMD of SJVN and PK Rai CMD of BSPHC in and Hazique Beg, MD of BPIC at Patna in presence of Nitish Kumar, chief minister of Bihar and Sushil Kumar Modi, deputy CM of Bihar, an SJVN spokesman stated. 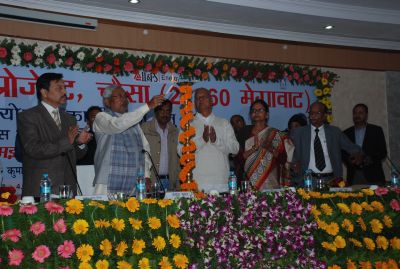 Speaking on the occasion RP Singh said that the 1320 MW thermal power project would involve and investment of Rs 8218 crore and would generate 9828 million units of energy at an average tariff of Rs 2.80 per unit.

The plant would be constructed by using super critical technology and would need an annual coal requirement of 6.25 million tons.

SJVN which currently own and operates the 1500 MW Nathpa Jhakri plant – the largest hydropower plant in the country, is in an advanced stage of completing the 412 MW Rampur hydropower plant. The Rampur plant is  scheduled for completion in September 2013.

The public sector power generating company has also entered renewable energy generation and is scheduled to commission a 47.6 MW wind power project in Maharashtra in June 2013.

SJVN which has targeted to add 5000 MW of generation capacity in the next five year plan also is implementing two more hydro electric projects in Himachal Pradesh, three in Uttrakhand, one in Nepal and two in Bhutan.