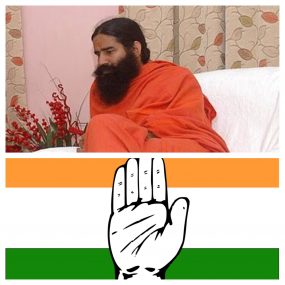 Dehra Dun: Having been routed in the Lok Sabha elections and received a drubbing in Haryana and Maharshtra, where it was in power, has the Congress high command decided to mend fences with those whom it had rubbed the wrong way and who command a dgree of respect amongst the masses.

At least this is the message that one got when Uttarakhand chief minister, Harish Rawat, requested yoga guru, Baba Ram Dev and his close aide Acharya Balkrishna to undertake a trip to the Kedarnath shrine and pay obeisance to Lord Shiva, using the state government helicopter.

That the yoga guru and his cllose confidante obliged the chief minister and made a trip to one of the holiest Hindu shrines in the country, along with some other religious leaders in tow on Wednesday morning is an indication that the Congress has started its effort to mend fences with yoga guru and his Patanjali Yogpeeth.

It may be recalled that the UPA government at the centre led by the Congress had unleashed a tirade against Baba Ram Dev.

The incident at the Ramlila Maidan in Delhi from where the yoga gure had to beat a hasty retreat wearing woman’s apparel to save himself from the lathis of the Delhi Police is still fresh in the minds of the people.

Thereafter the Uttarakhand government under former chief minister lodged a number of cases against the Trusts and organisations of the yoga guru. Besides a number of cases of tax evasion have also been lodged allegedly at the behest of the centre.

In fact Baba Ram Dev and his close confidante, Acharya Balkrishan had clarified that the cases were being lodged agaist their organisations, despite no wrongs being done by them, at the behest of the Congress party, against whom the yoga guru had come out openly in the run up to the Lok sabjha elections.

This was perhaps why there was a flutter in political circles here as soon as it was iknown that the chief minister Harish Rawat, who heads a Congress government in Uttarakhand had offered the state helicopter to take Baba Ramdev and his entourage from Haridwar to Kedarnath on Wednesday.

While the yoga gurue claimed that the chief minister had offered an olive branch, which he had readily accepted, political circles here were agog with rumours that it was a classic exampme of you scratch my back, I scratch yours.

“It is well kinown that Baba Ramdev is very close to the BJP leaders and the government in Delhi and obviously the Congress wants to wean him away, taking long term political gains in mind. Baba Ram Dev also wants that the Uttarakhand government goes soft in the cases that have been registered against him and his organisations and as such wasm mjore than happy to accept the offer of the state chief minister”, political observers here said.

However, they were of the view that the Uttarakhand chief minister could not have taken the initiative on his own and the Congress high command must have asked Rawat to make the beginning with the yoga guru. The trip was also to be given due publicity in the national media, which was perhaps why some television representatives from Delhi were also included.