Srinagar: As the 40-day period known as Chillai Kalan begins tomorrow, Kashmiris are bracing up to brave the coldest part of the winter season.

For the average citizen, the charcoal-filled earthen vessel woven in willow wicker called the ‘kangri’ still remains the best bet to keep body and soul together. 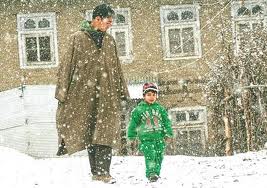 For most Kashmiris, traditional practices are still more dependable. The kangri under the tweed over-garment, the ‘pheran’, is still the best personal heating system while the more affluent ones are now using kerosene and LPG stoves to warm themselves up. In Srinagar, however, a few households have also switched over to central heating systems.

A special dish known as ‘harisa’ is a winter delicacy savoured by the well-to-do in Srinagar city during the winter. It is prepared by cooking fresh, minced mutton with rice, salt and spices in a huge clay vessel over simmering fire during the entire night. It is served in the mornings. Harisa is these days sold at Rs.500 a kilogram at special shops in the city.

Although fresh vegetables arrive here daily during the winter months through the Jammu-Srinagar highway, temporary closures of the Valley’s only road link to the outside world results in instantaneous shortages of edibles and essentials.

It is because of this that many households keep stocks of dried vegetables, pulses and rations handy.

Tomatoes, brinjals, pumpkins, spinach and turnips are dried and stored to be used during the period.

“This results in severe cold wave conditions as the sub-zero temperatures get coupled with the chill factor,” the official added.

Locals have often to light small fires to defreeze their water pipes and taps during Chillai Kalan and children with running noses and swollen feet due to chilblains are a common sight at doctors’ clinics.

Even if it doesn’t snow for most of the time during Chillai Kalan, roads and walkways are so slippery that very few motorists and shoppers venture out before the frost breaks.

The majority of patients reporting at the local hospitals during Chillai Kalan are those with broken limbs because of slippery walkways although Kashmiris equip themselves with shoes with better road grip during the period.

Elders vividly remember how vendors would trudge through deep snow carrying groceries to villages during Chillai Kalan. There were no shops in most villages those days.

“Grocers would vend in villages carrying merchandise on the backs of their assistants. We would buy edible oil, spices and soap from them during the winter months as going to Srinagar was very difficult when roads remained snowbound,” said Abdul Rehman Sheikh, 85, who lives in a north Kashmir district.

“The grocers would move from one village to another selling their merchandise. Villagers would always be more than willing to play host to the grocer as he would afford a little discount to the host on purchases,” Sheikh added.

While children and adventure lovers wait for frozen water surfaces to skate on and icicles to play with during Chillai Kalan, for most Kashmiris it is the harshest period of winter not many love to look forward to.