Its fashionable to begin articles these days with a disclaimer (it makes one appear more profound), so let me confess too. I am no law graduate, never having enrolled myself in the ” La Fucklety” of Delhi University, as the Law Faculty was lovingly called in my days. My knowledge of law is also limited: I cannot tell a habeas from a corpus and don’t even know the difference between a solicitor and a procurer. But I have of late been getting the feeling that you don’t need to know law to realise that all is not well with our juridical ecology, that the pedestal on which we have ensconced our judiciary has far too many bird droppings on it- in short, it is impossible to make sense of either some of our laws or even some of the judgements of our higher courts.

I am not talking here of the Courts’ refusal to decriminalise homesexuality or to disallow euthanasia in terminal cases, both important facets of a progressive value system which more and more countries are increasingly adopting but we seem to be shying away from because of an ossified mind set. I am not talking either of a government( both past and present) that prefers to flounder in legislations of the last two centuries rather than devise laws for the 21st century. These are serious crevasses in our legal system into which thousands have fallen, but they will have to wait for another day.

I am addressing today the more immediate issue of how we treat different classes of accused, even though we are fed, ad nauseum, the lie that the law is the same for everyone. I am increasingly beginning to feel that the law is putty in the hands of skilled and expensive lawyers and that there is no consistency in the judgements handed down from those lofty heights.

How else does one explain that in this country a convicted and sentenced felon can get bail while a person who is not even convicted is denied bail? Both Mr. Lalu Yadav and Ms. Jayalalitha have been convicted and sentenced but have been released on bail, simply because they have/ are appealing their convictions. Why then have the Talwars not been released, whose circumstances are exactly similar? I am no apologist for Tarun Tejpal but I am one for equality before the law, and therefore I am compelled to wonder why he has been locked up since one year even though he has not been convicted and his trial has a long way to go? Because one set relates to corruption( not heinous) and the other to violent crimes? Then why were Kanimozhi and A Raja imprisoned for a year( their charge was also of corruption)? Because they could influence witnesses? Really? It stretches one’s credulity to believe that the latter two could threaten/bribe witnesses and Lalu and Jayalalitha cannot. 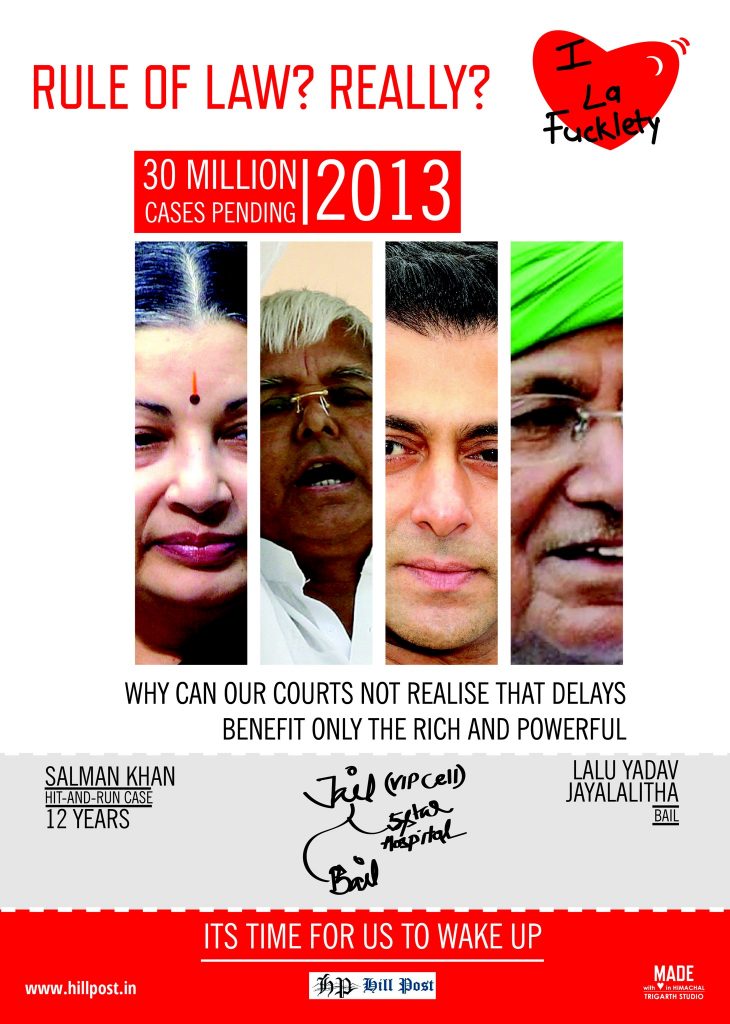 As I said earlier, try as you might it will be impossible to locate any thread of consistency in the law applied in these cases. We are told that each case is different-yes, indeed, but isn’t the law supposed to be the same? I do discern, however, a faint and nebulous thread running through these cases, and perhaps you do too- if you are a politician the law will treat you with kid gloves, and if your case is picked up by Arnab Goswami and Karan Thapar for prime time panel discussions then you are damned! This is a constantly emerging pattern and cannot be a coincidence. The Talwars and Tejpal (and Mr. Pandher-let us not forget this gentleman who has been acquitted in almost all the cases against him but has been reduced to a cadaver after seven years in jail)-they were dead meat the day the prime time mob got after them, and the law obliged.

The grant of parole is another mystery I cannot fathom. Tens of thousands of under-trials cannot even think of getting parole but the privileged have no problem, even though they are convicted and sentenced. A Chautala gets the reprieve on medical grounds and then goes on to campaign for elections: our judicial conscience is assuaged by sending him back to jail AFTER the campaigning period is over! A Manu Sharma (sentenced to life for murder, no less) repeatedly obtains parole for attending funerals, weddings and taking exams. A Sanjay Dutt benefits likewise because his wife is supposed to be ill, though she is otherwise seen partying. Two Italian marines are given a vacation to celebrate Christmas with their families in Italy- if bilateral relations make this imperative, then why charge them in the first place: why not simply accept the crores offered by Italy as compensation and give the two a Presidential pardon? Why first bring them into the legal system and then twist this system and make a mockery of it?

Something else that addles my jurisprudence challenged brain is the constant interventions by higher courts in the proceedings of trial courts, somewhat similar to what Arnab Goswami does to his panelists. With more than 30 million cases pending in various courts as of 2013, should trials be stayed on the flimsiest of applications? A case which immediately comes to mind is the National Herald case against the Gandhi clan. Taking cognizance of a complaint the trial court issued summons to the accused for appearance almost three months ago. The accused immediately approached a higher court (no surprises here!) and got a stay-and added another number to the pendency. The case has not moved forward an inch-which suits the Gandhis just fine. Consider another odd case: Salman Khan was CONVICTED by a trial court in the black buck poaching case two years ago but the sentence was suspended by the Rajasthan High Court without even deciding his appeal. The Rajasthan govt. has challenged this in the Supreme Court. The main appeal is yet to be heard. Years have been unnecessarily added to the final disposal of this case enabling our dabang hero to add a few dozen more crores to his kitty. And this is in addition to the dozens he has already added because his hit-and-run case in Bombay has already taken 12 years and reached nowhere, because mid-way the honourable judge decided to add fresh charges against the thespian, and the whole trial had to be started de nouveau. Why can our courts not realise that delays benefit only the rich and powerful, and then do something about it?

It has become almost the norm, if your pockets are deep enough and your connections extensive enough, to challenge every interim order of a trial court at a higher forum. Appeals are filed against charge-sheets, summons and warrants, framing of charges, summoning of witnesses, nature of evidences, and just about every excuse the fecund mind of a well paid lawyer can conjure up. I am unable to understand why these appeals are entertained at all-why not simply let the trial go on and let these issues become the causus belli in appeal when the trial court passes its final order? I have no difficulty in understanding why the lawyers do so- after all, if you are paid a few lakhs for every appearance( in court) your mind will be as fertile as a vermicomposting pit. But why do the courts allow this to happen?

How is it that politicians who work 16 hours a day while in office and corporates who party for just as long, invariably develop heart/ blood pressure conditions the moment they are sent to jail? And why are our courts so accommodating as to send them to the nearest five star hospital ( in the comfort of which they can plan their next interlocutory appeal)? Why can they not be treated, if treatment is required at all, in the jail hospital or the nearest govt. hospital? After all, govt. hospitals are where law abiding and unconvicted( as yet) citizens like you and I go to-why not these hot shots? If the courts sent them there instead of molly coddling them I can guarantee that, given the conditions of our govt. hospitals, these worthies would be screaming to be sent back to their VIP cells in Tihar and such requests would end once and for all.

And finally, about our laws and law makers. About 150000 Indians die in traffic accidents every year, victims of over speeding, drunk driving, unlicensed drivers, rash driving and other similar conscious acts. And yet the perpetrators of these deaths obtain bail within a few hours and, if convicted at all, can get a maximum sentence of two years only. In other words if you kill somebody with a six inch pistol or a nine inch knife weighing 500 grammes you will get life or death, but if you know your law you would be better advised to kill someone with a four meter projectile weighing two tonnes; chances are you would go scot free or spend just a year or two in jail, even less if you develop high blood pressure or an enlarged prostate or decide to take your bar council exams at this propitious moment. Why cannot the law be amended to make such a deliberate act( it IS deliberate if you drive while drunk or break the speed limit or do not have a driving license) culpable homicide at least?

In the USA such offences come under a separate category termed vehicular homicide, an eminently sensible formulation. What prevents the government from bringing in a similar law, or the Supreme Court from ordering the govt. to do so?

Civilisations cannot exist for long without a system for imparting justice that is fair, equitable, affordable, accessible; a system that is not hijacked by the rich or powerful few. In India our much vaunted justice or judicial system sadly lacks all these attributes. Furthermore, it is not merely laws that ensure the rule of law: its guarantee lies in the intellectual integrity of its practitioners-the plaintiffs, lawyers, the judges; here again there is much that is found wanting.
The time has come for us to tackle this creeping malaise. Otherwise there are Alternative Dispute Redressal Mechanisms( ADRMs) waiting in the wings to take over. These comprise a range of mediums or agencies, none of them compatible with a progressive society: the Taliban, The Khap Panchayat, the D-company, the Vigilante, the Encounter Specialist, the Dirty Harry cop. Their prototypes have already arrived. Its time for us to wake up.