Technological advancement has made development of all sections of society possible but here in India, the rich-poor divide is only widening, fuelling the traditional and modern dual economy to work at crossroads and defeating all efforts to bridge the gap. A democratic churning having thrown up a new leadership could bring about inclusive development and turn around the sagging economy.

Continuous improvement in technology has made development a never ending process. Ever increasing innovations have brought about an era where advancement of human society is constant and there is an escalating demand for regular progress in all aspects of life. People like to believe that the fruits of human endeavor are out there for everybody to enjoy, but in reality growth and progress is not all inclusive. It has still not percolated to all sections of society and there is mounting inequality as a result of this wavered advancement. 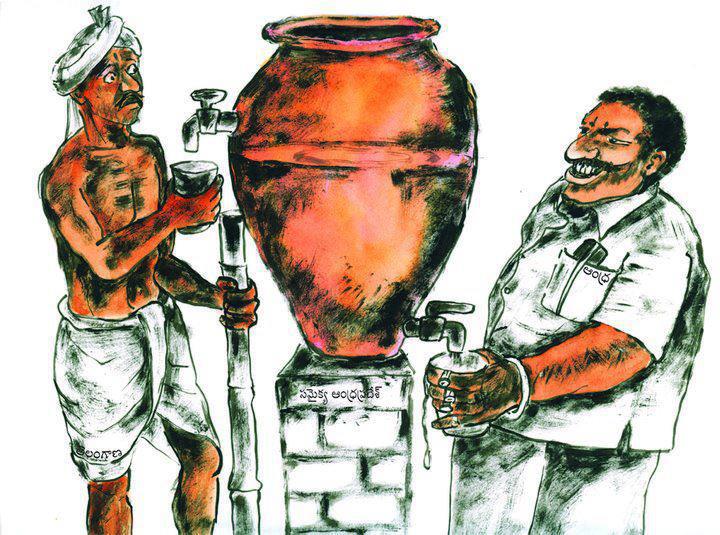 Developing countries like India are a prime example of disproportionate growth which in turn has lead to the emergence of dual economy. The term dual economy was coined by the developmental economist Sir Arthur Lewis and it denotes a situation where developing countries have a twofold economic structure divided into the modern sector and the traditional sector. The modern sector symbolizes urban life, modern industry and application of latest technology, while the traditional sector is associated with rural life, agriculture, outdated institutions and use of backward technology. A cursory understanding of the Indian economic setup removes all ambiguity and makes it crystal clear that the country has a fledgling dual economic arrangement.

Since India is a diverse and complicated land the twin economic model of modern and traditional sector has attained unique dynamics in the country. Rural India is still perplexed with problems such as lack of education, good road connectivity, ineffective sanitation systems, erratic power supply and poor healthcare mechanisms. Apart from these infrastructure hurdles, backward social institutions such as caste classification further impediment growth in the countryside.  While there are inherently stark differences in the quality of life between urban and rural households, there are also disparities in the standard of living in urban areas. The slum dwellers in big metropolitan cities of Delhi, Mumbai, Kolkata, Chennai etc are confounded with almost the same problems as those in the villages of India. Though they may be living in an urban environment but access to basic healthcare, sanitation and education is minimal for people living in these shanties.

All national and state political parties in India have won elections by campaigning for the emancipation of the poor and downtrodden people. The trend of patronizing the cause of the poor before elections was championed by Indira Gandhi when she coined the Garibi Hatao slogan for the congress party in the 1971 elections. The slogan was catchy and did ensure a massive victory for the congress party in the general elections, however little was done to liberate the masses from the vicious circle of poverty once the party was in power. This trend has long been followed by the congress party which seeks to present itself as the lone fighter for dalits, muslims, OBCs and other economically and socially weaker sections of society. Once in power the policies of the party and its allies have always ensured that the marginalized sections of society are never incorporated into the mainstream economic system and are left to fend for themselves on the fringes.

For a nation to move forward it is imperative that there is all around inclusive growth and development. The economically and socially fragile groups must be given equal opportunities to exploit the benefits of technological and economic advancement. Under the UPA government led by the congress party little was done to bridge the gap between the two economic models existing simultaneously in the country and incorporate the depressed sections of society into the mainstream economic system. Legislations such as the MNREGA and The Right to Fair Compensation and Transparency in Land Acquisition, Rehabilitation and Resettlement Act,2013 have for now ensured that growth and employment in the villages will be limited and the expansion of the traditional sector towards a more robust economy supported by manufacturing and new technology will be incomplete. These acts have impaired the conventional shift by which a country moves from a pre dominantly agricultural society to an industrial one to guarantee development and growth.

The change in leadership at the centre has raised hopes for an economic revival. The Narendra Modi led BJP government has promised millions that the payback of development will be wide spread and penetrate across all sections of Indian society. Already the wheels of governance are in motion towards achieving this goal. Positive steps have been taken by the government in many sectors. The government has launched the ambitious Jan Dhan Yojana Scheme which strives to financially include the rural masses into the banking system and there is a target of opening 75 million accounts by January 2015. This will be major step towards incorporating the rural masses into the forefront of the economic system. The government is further promising amendments to the new Land Acquisition Act so as to remove inadequate hurdles while acquiring land for industrial purposes. The amendments when complete shall aim to boost the dormant manufacturing sector by encouraging investments from entrepreneurs which in turn will open a plethora of employment opportunities. In addition to these reforms the government has further set up a panel to identify outdated laws which are restricting growth of business in order to repeal them.

Political institutions and their economic outlook are relevant in a democracy because they ultimately end up controlling the government. For the first time since independence we have a leadership that has raised hopes for an inclusive economic system where there will be efficient allocation and utilization of resources for the benefit of all. While reforms leading towards a truly incorporating economic system will take time, the Modi led BJP government is already taking significant steps towards achieving this goal. It seems that the Prime Minister and his government realize that to make India an economic powerhouse an inclusive economy which enables economic empowerment of the masses is a must. The country must be patient and must back the government in its effort to revive a beaten down economic system.