Dehra Dun : The recent statement by union minister Uma Bharti that the submersion of ashes in the Ganga, cremation of bodies on the ghats along its banks and putting half-burnt bodies into the river would be stopped for the sake of a clean and pollution-free Ganga, may have been well received by environmentalists, but it has upset the community of sages and sadhus who are up in arms.

Shrimahant Hari Giri, gen secretary of the Akhara Prishad sais that it is rather sad that the minister has come up against a tradition that has been going on for centuries in the country and putting an end to a practice that is held in high esteem in the Hindu community. “Rather than imposing a ban on mining and stopping the discharge of untreated sewerage and other discharge into the river, she is terming the submersion of ashes and flowers into the river as unholy”, he added.

He went on to say that there was an indirect message to the sages and sadhus who undertake ‘jal samadhi’ (bodies submerged into the river) and hastened to add that the community had been demanding for long that if they get space in the religious cities of the country for undertaking ‘bhu-samadhi’ (burial in the ground) the practice of taking ‘jal samadhi’ would be stopped. 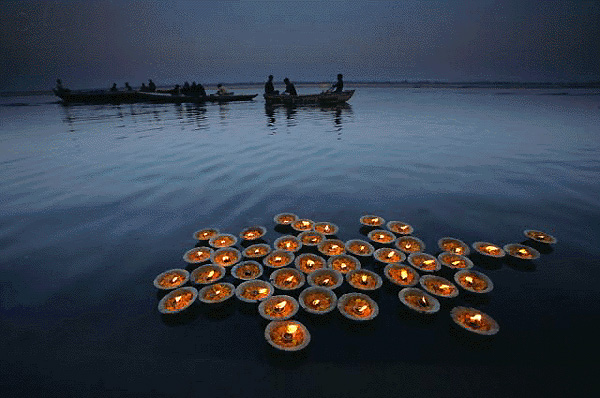 Gen secretary of the Ganga Sabha, Virendra Srikunj, went a step ahead and said that the union minister must know the fact that Ganga came to earth basically for going over the ashes of Sagar children, and now she is saying that the traditional rituals relating to death and submersion of ashes would be stopped in the river. “This is playing with the religious sentiments of the masses and will be opposed tooth and nail”, he added.

While environmentalists may be all out for supporting the union minister in a move, which if implemented could have far reaching repercussions in the Hindu community, pundits and purohits at Har-ki-Pairi in Haridwar said that one should not forget the fact that even the first prime minister of the country, Jawahar Lal Nehru’s Ashes were submerged in the river at Triveni at Allahabad .

They went on to say that let first things come first and for that the union minister must stop all the discharge of industrial and other discharge into the Ganga, after which she could talk of stopping the submersion of ashes and the traditional offerings during the cremations rites from being submerged into the river. “The cremation ghats have been along the banks of the river for ages and now she is talking of removing them”, they contended

They further said that a survey should be held and chemical examination of the Ganga water be done to ensure what were the pollutamnts that were maximum in the river. Are the fish and other aquatic flora and fauna of river dying of the ashes and flowers that are submerged in the river or are they dying of the industrial waste and other pollutants, they asked.

However, environmentalists were quick to point out that various works have been taken to ensure a clean Ganga for almost three decades now but without success. Various civil works have been reportedly taken up under the Ganga Action Plan and thousands of crores of rupees have been spent, including on the construction of treatment plants for sewerages, but there is nothing to show whereas the water of the river is concerned, which continues to be as polluted as before, if not more.

They point out that the fact remains that the Ganga continues to be a dumping place, may it be industrial waste or untreated sewerage or other waste of the numerous cities that lie along its banks. “The problem starts right from Uttarakhand itself, where the untreated sewerage and other waste of  about 120 towns and townships is dumped into the river. Work on the treatment plants of some of the towhsips have been going on for as many as four years and show no signs of completion on the plea that there are no funds to complete them”, they remarked.

Environmentalists further said that the Supreme Court had raised a very important issue what if the state governments and municipal bodies do not toe the line of the central government on the issue, what would be the fate of the Clean Ganga Plan. Stopping submersion of the ashes and flowers into the river and removing the cremation ghats are important, but first industrial, human and agriculture waste that is put into the river without any reservation need to be stopped, they felt.