If sitting through art cinema tires you and watching movies based on real life tragedies irks you, then Khoobsurat is the rom-com for you. The roller coaster ride it takes you on and the pain of a heart in despair, make it a must watch.

It is named Khoobsurat and there was word that it is a remake of the old movie by the same name, with Rekha in the lead. The movie only borrows  the basic skeleton from the classic.

Sonam Kapoor is steadily expanding her base of loyal admirers who have believed in the genetic Kapoor legacy all along. And she manages to re-enforce their belief in her.

After Ranjhana, this is a total reversal of roles, which she carries on like a seasoned actor. She wears over loud clothes, with weird prints and has a chilled out attitude that comes across as a breeze of fresh air.

Sonam looks so refreshing, unlike other heroines who are hell bent on wearing the smallest clothes possible and more bothered about the number of item numbers they get to play in a movie. Sonam Kapoor plays the character of Millie, a reputed and successful physiotherapist. She can act and let’s give her credit for it.

The story revolves around this royal family that has had a personal tragedy and never been able to get over it.

Milli is called in to cater to the  handicapped wheel chair ridden Raja Shekhar, very decently played by Aamir Raza.

Ratna Pathak as the uppity queen, she plays the character with all its idiosyncrasies and tight upper lip, very convincingly. Shashank Ghosh the director manages to maintain the individual identities of all the characters and plays with their strengths. 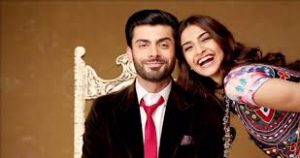 The palace, the backdrops and the whole aura of a commoner living amongst royalty is well created to suit the plot.

Coming to the most important find of the movie, ladies, Fawad Khan is a find. His chocolaty voice, his mannerisms, the expressions and persona steal the show from the first frame till the last.

Like other successful Pakistani actors, he has complete control over his emotions, voice modulation and manages to deliver a performance that forces you to sit through the whole movie. 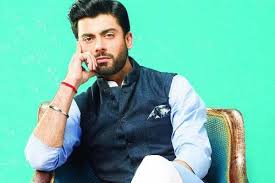 Kirron Kher, is a laughing riot. She can easily be classified as one of the most talented actress in our industry.

The lady had delivered the most moving portrayal of a grieving mother in Punjab 1984 and manages to give you some of the most hilarious moments in this movie. She plays Sonam’s mother Manju and her nuances and wit are just too much.

You won’t be able to stop the giggles and the credit for this should be given to the writers for giving her some of the funniest lines in the movie. Which include – ‘royal kanjar khana’ and so many more. She and Ratna Pathak strike a fine balance. 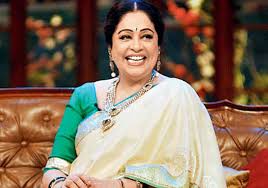 The romantics will love the portrayal of love between the lead pair. The voices in the heads add so much melodrama to an otherwise predictable romantic scene.

This twisty tale of love, also has Aditi Rao in a 3  min cameo playing Vikram’s fiancée. It will be interesting to see the movie Fawad Khan signs next, as that will determine his stay on this side of the border. For now we wish him all the best and great success. 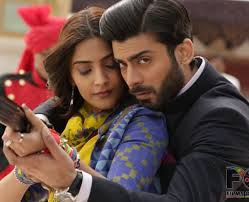 Except for a kidnapping that is badly timed and the unnecessary addition of Bengali flavor, the movie is a must see, at least once.

If you want to rekindle your romance buds for an hour or so, go watch Khoobsurat and come out smiling.

We give the movie 3 stars