The outgoing academic said that more often than not it was the involvement of political parties in student’s politics that was detrimental to academic environment on the campus.

Shimla: Hit by a financial crunch Himachal Pradesh University vice-chancellor ADN Bajpai has proposed a fee hike to make ends meet and in the face of intense opposition from students associations has sought banning of students elections for better academic environment on the campus.

Talking to reporters today at what termed his last interaction with the media before demitting office by the weekend he said “I’m not against students’ participation in democratic processes but against students elections because of the violence that often accompanies them.” Unless given a second term, the three year term of vice-chancellor Bajpai ends on May 24. 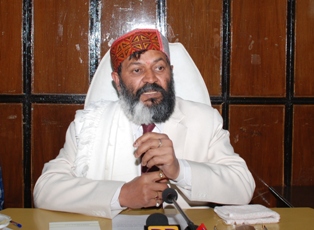 The outgoing academic said that more often than not it was the involvement of political parties in student’s politics that was detrimental to academic environment on the campus.

With HPU notorious for involvement of the faculty in political activities including students politics, he said, to improve the intellectual capacity of the institution, teachers need to completely banned from participating in active politics.” He alleged that there were several teachers who were active in politics which should not be allowed.

With the HPU rule book permitting teachers from participating in politics even contesting elections to parliament or the state assembly, Bajpai asked for amending the university constitution.

Denying all charges of corruption and wrong doing that are being leveled by agitating students, especially those belonging to the left dominate Students Central Association, he said “I have never indulged in any corruption. Everything has been done in accordance with the law.”

About the challenges facing the university, he said that resource mobilization was the biggest one. “The university has successfully secured many research projects but students fee hike is the major resource that can mobilize resources for the institution,” he said.

“The university requires over Rs 110 crore annually to meet its budgetary requirements and was annually getting about Rs 69 crore as grants from the state government. After adding up the internal resources, which includes the fees paid by students, there is an annual shortfall of Rs 10 to Rs 15 crore, said the outgoing vice chancellor

About adopting the new Rashtriya Uchtar Shiksha Abhiyan (RUSA) system, he acknowledged there were many hiccups in implementing the reforms. About the delays in declaring results, something that under RUSA is not permitted, he said, “ This was our first year in rolling out the new system, the institution will overcome the shortcomings.”

However, he claimed that adopting RUSA had become the envy of academic institutions in neighboring states for the benefits it provided to the institution of higher learning.