One week long road show campaign by the HP State AIDS Control Society (HPSACS) concluded with a musical extravaganza at Nurpur. The campaign which was launched on the occasion of “International day against drug abuse” toured various parts of the tourist district of Kangra in the Western Himalayan Region of north India. The themes were
“Say no to Drugs and yes to Life – Protect yourself from getting HIV” & “Know your status, Act now- Walk into the ICTC”.

Most people who are HIV infected don’t know their status till they develop AIDS. People need to learn their HIV status; as if they are negative they can be relaxed and take precaution for future. If they test positive they can avail the benefit of free treatment, which is available at Shimla and Hamirpur by HPSACS, and they can live long and healthy meaningful life. If a person does not know his status, it means that he or she is missing on an opportunity to get timely treatment, care and support. The test is carried out only under the principle of consent, confidentiality and counseling; and three tests are performed on samples in ICTC to rule out errors.

Patients can walk in to the centre without any OPD slip and avail the free facilities. Why free ICTC services are better option than other labs: In the Govt. ICTC, each blood sample is tested thrice using different rapid tests to confirm the report, as compared to private labs which usually conduct only one test. ELISA is also done at ICTC Dharamshala.
Moreover private Labs donâ€™t have a counselor who can help the client.Â  Moreover, the test is totally free of cost at ICTC. So traveling some distance to the Integrated Counseling and Testing Centre is worthwhile, as the services are better. 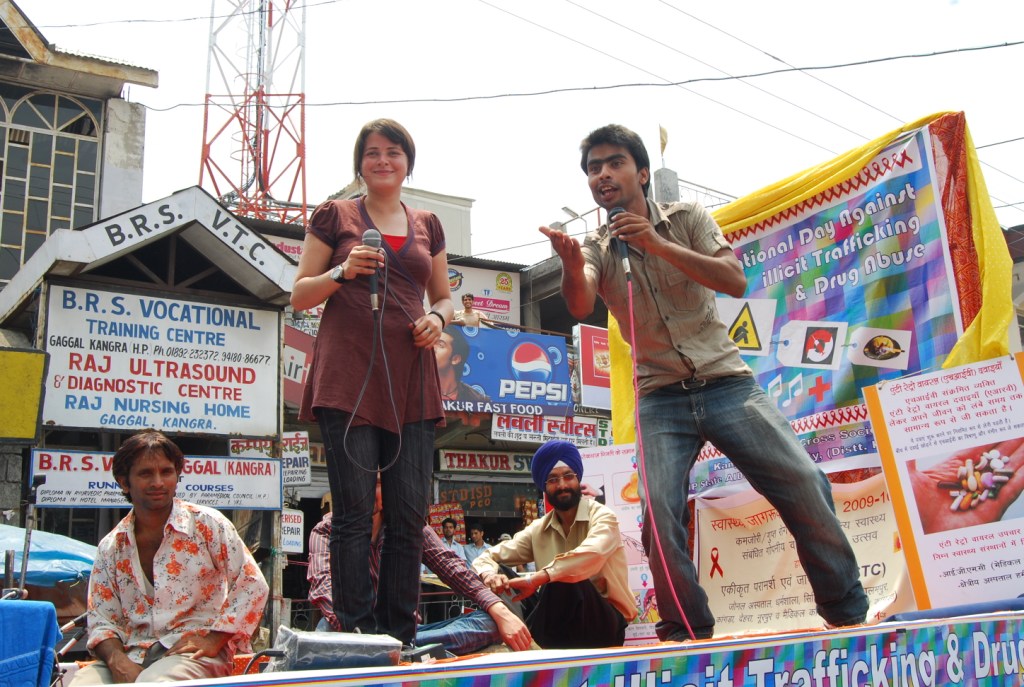 A team of artists from Trigart Vasundhara Rangmanch Dharamshala took up the challenge to brave the scorching heat, torrential rains and perform skits and entertaining musical items through a road show. “The shows have generated a lot of interest among the local youth and they actively participate in the interactive sessions through quiz, localsÂ  are even coming up and performing on the open mobile stage” told Rohit Vohra, team leader of the troupe.Â  Vijay Kumar from Technical Support Unit to NACO told that when we take alcohol, drugs we tend to shed inhibitions, become carefree and take risks like indulging in sexual activity, not practicing safe sex, and even sharing needles which can lead to HIV infection. Saying No to Drugs and protecting self from HIV is the key theme of this campaign. Children and youth start on drugs for a number of reasons, fromÂ  curiosity, recreation to the need to cope with stress but drug abuse and addiction lead to a complex set of social, medical and economic problems with serious implications.

There are several emerging Intravenous Drug Use -HIV epidemic hotspots in north Indian states. According to sentinel surveillance data from 2006, the prevalence of HIV among drug users is 10.0% in New Delhi, 13.8 % in Punjab and 17.6% in Chandigarh. Mr Abrol Secretary Red Cross Kangra, told that a de-addiction centre is also being run at
Dharamshala where people can avail facilities free of cost.