Manali:  A international conference on sea-buckthorn is to be held in India, Ravi Thakur, the legislator from Lahaul and Spiti disclosed to Hill Post.

Thakur, who  along with scientists from Palampur Agriculture University are on tour to Potsdam, Germany, to attend a seven-day International Conference on sea-buckthorn said that efforts would be made to propagate the crop in all tribal areas and also establish a sea-buckthorn Research Centre in Himachal Pradesh.

The conference, most likely would be held in 2015, said Thakur. 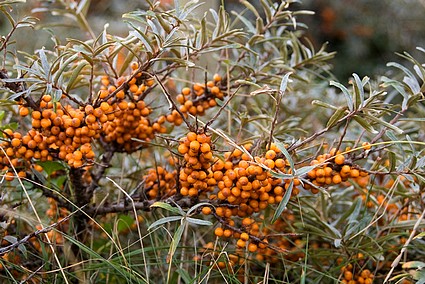 The Ministries of Environment, Forest and Tribal Development would be approached for funding of various programmes on sea-buckthorn development, said Thakur.

He said sea-buckthorn locally known as ‘Drilbu’ in Himachal was the best variety found in the world and added that the same was very rich in vitamin C and used in treatment of various diseases like heart problem.

Ladhak region of Jammu and Kashmir, Lahaul Spiti, parts of Kinnaur and Chamba districts of Himachal Pradesh are together known as the cold deserts of India.

Due to extreme temperatures and sparse forest cover, life in these areas is too harsh beyond imagination. Cut off from the rest of the country for most of the year, people lived in these regions for ages with difficulty, but lately natural resource-based livelihood initiative by people and the government alike has resulted in the economy of the place growing by leaps and bounds.

On the basis of geographical conditions, Lahaul & Spiti district can be divided into two main regions, i.e. Lahaul valley and Spiti valley.

Lahaul valley is situated towards west and covers an area of 6,097 square kilometers where towering peaks ranging between 5,480 metres and 6,400 metres can be seen.

From October till April the whole valley is in a grip of a intense cold wave as temperature mostly remain below -16 degree Celsius on average.

Due to prevalence of cold and dry climatic conditions, just a handful of tree species like Betula utilis, Pinus wallichiana, Juniper macropoda, Cedrus deodar and Hippophae rhamnoides can grow in this region. But people’s hard work has now made it possible to grow other trees like Willow, Salix and Populas nigra.

More importantly, people themselves are taking appropriate steps to protect these trees. There are about 200 villages in Lahaul valley where with about 14,000 farmers.

The problem of soil erosion is widely prevalent in Lahaul leading to deposition of silt in Chandra-Bhaga and Spiti rivers.

Landslides are also widespread and timber and fuel wood scarcity is also a perennial problem here. To counter these problems the people of Lahaul valley have grown Willows on a very large scale. But that was not enough.

Keeping in view the aforesaid problems, scientists involved in forest resource development in the region identified seabuckthorn (known as Chharma in local dialect), besides traditional crops like potato peas and medicinal plants, as a sustainable solution.

Seabuckthorn can be seen growing naturally in higher slopes of Lauhal & Spiti, Pangi area of Chamba district and Pooh division of Kinnaur district.

This bush provides fuel, protein rich fodder and is considered as good soil binder besides increasing soil fertility by enhancing nitrogen levels. But above all, its fruits is a rich source of vitamin C, E and other nutrients.

Nowadays life-saving drinks, cosmetics and medicines in the form of injections and oils are being prepared from its extracts and therefore it is in great demand.

Keeping in view its demand in domestic and foreign markets, farmers’ organisations were formed in these areas and the shrub was cultivated on commercial lines for the first time.

Dr Virender Singh, a farm-forestry scientist from CSK HPKVV (Chaudhary Sarwan Kumar Himachal Pradesh Krishi Vishwavidalya), Palampur, who has been working on development and promotion of seabuckthorn for the last 15 years, revealed that the plant has the potential to change the economy of the region. He has been making people aware regarding latest research regarding seabuckthorn and how they can benefit from it.

Recently, a team from Policy Analysis and Planning Unit from HPFSR (Himachal Pradesh Forest Sector Reforms) visited Lahaul valley and evaluated the success of the initiative.

More number of SHGs, NGOs, and societies have come forward to take up seabuckthorn cultivation. President of Lauhal & Spiti Seabuckthorn Society revealed that they have already been selling their produce to private companies.

Now the question is – how well people of Lahaul & Spiti can manage this god sent gift?