Shimla: More than 250 daredevils are to be out for the next six days on some of the most dangerous roads in the world that at places climb to 5600 meters in Himalayan country, competing against each other at the 15th Raid de Himalaya, India’s best challenge at cross country motor rallying.

Broadly the Raid is classified under two categories, the X-treme for the professional and Adventure Trail for the amateur and has 5 competitive categories in which the adventure motorists compete.

The competitive categories include, Raid X-treme, for four wheelers on an all-out speed format, with 39 teams from all over the country competing for the top spot. Each team comprises a driver and a navigator.

There are motorcycles and quads competing the X-treme version, with there being 31 bikers from India and abroad participating. The X-treme alpine has 21 bikers, who will be competing for three days only in the high speed category. This version has been introduced for the first time in 15 years of the Raid history.

Raid Adventure Trial follows the Time-Speed-Distance format and there are 62 teams in this category comprising of a driver and a navigator.

Introduced for the first time Raid has Scooters, a new category, competing in the X-treme version for three days. There are only 5 entries in the inaugural year.
On day one the X-treme Raid have a warm round as they head to Manali via Dalog, Chamola, Luhri, Behna, Chimni, Khanag.

The second leg gets to Kaza via Gramphoo and Losar. On Day there the Raid does a Kaza to Kaza Monastery Necklace loop; head towards Demul Jn, Lingti, reaches Shichling and then heads back to Kaza.

On day four the battle hardened motorists head to Pang after crossing Gramphoo, Patseo and Sarchu. Leg five heads to Leh after crossing Debring and Daat. The final leg is a Leh to Leh loop, where the drivers’ mettle is tested at Wari La, Khalsar (5,250 meters, 17,300 feet) and Khardung La (5,602 meters, 18,379 feet) passes.

Wari La is going to be a highly exacting challenge for the Raiders. The Wari La climb happens in 14 kilometers, while the Khardung La climb takes 32 kilometers. The descent is equally steep and rapid into the Nubra Valley.

The challenge of the Raid lies in competitive driving at these impossible altitudes, which demand the best from both man and machine. 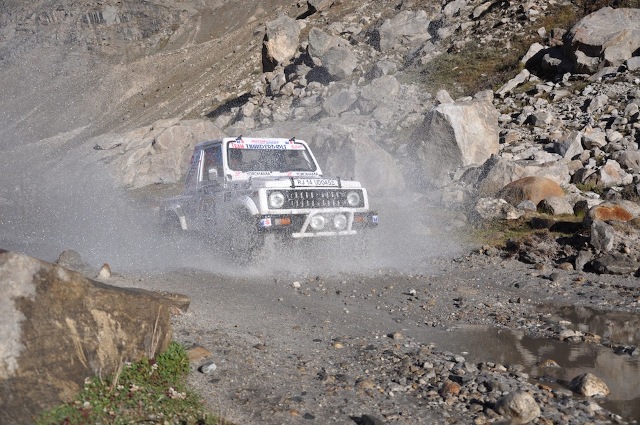 In its 14-year history, the Raid has conquerd the Khardung La and the Wari La only once. The high mountain passes are marked by such heavy snowfall and blizzards that they have refused to yield way to motorsport enthusiasts from the country and abroad.

The Adventure Trial category on day one also head to Manali but take a different rout via Sunni, Bakrote, Kelodhar, Garhagushaini, Banjar and Kullu.

One day two the adventure moves to Tabo after crossing Rohtang Pass, Gramphoo, Kunzum La and Losar. The third leg is a Tabo to Tabo loop that passes Sichling, Dankhar, Sagnam, Kaza, Demul, Lidang and Poh.

On day four the adventure trail heads to Keylong after passing through Kaza, Kunzum La, Batal, Gramphoo and Tandi.

The fifth leg will start from Keylong and head to Leh crossing Baralacha La, Sarchu, Pang, Taglang La, Upshi culminating at Leh. The final leg too is a Leh to Leh loop.

For the first time, a police team (Himachal) is competing at the Raid. The team comprises Constable Munish Mehta and Constable Richa Sharma, in a Maruti Gypsy competes in the Adventure Trial category.

There is to be ann all-women team of the Army consisting of Maj Smitha of ASC and Capt Madhavi Singh of EME out competing for the top spot in Raid Adventure Trial.

Sheetal Bidaye of Mumbai, is out to challenge the men’s sport as she competes in the tough Raid X-treme (Motorcycles and Quads) category.

Women’s power is to the fore at the 15th Raid as it also features Kalyani Potekar, a student of B.Sc. IIIrd year in Fergusson College, Pune; all of 20 years old, making her the youngest woman biker competing in Raid X-treme (Alpine) version.

In all the motorists are to cover over 1800 Kms in 6 days passing through traverse and difficult stretches of Kaza and the Monastery Necklace, Khardung La and Wari La, and the temperamental Nubra Valley.

Vijay Parmar, President of the organizing Himalayan Motorsport club says that Raid-de-Himalaya 2013 promises to be both hugely difficult and dogged by uncertain wheather.

As early onset of winters is predicted in the western Himalayan region, participants may actually face snow and icy winds, mercury falling to 15 degree Celsius below zero at places, said Parmar.