Manali: Environmentalists say retreating glaciers and melting snows on high Himalayan peaks could impact millions of people in the Indian subcontinent who rely on rivers fed by the massive ice sheets on the mountains. A surge in tourism is impacting the mountains in India’s northern Himachal Pradesh state.

Tucked in the high Himalayas, the picturesque hill town of Manali in the Kullu Valley thrives on the tourists who come to escape the scorching heat of the Indian plains.

Vikramjeet Singh Thakur who runs a adventure company Pinnackle Adventure in Manali said a snow-covered pass that lies 50 kilometers up a snaking mountain road is a huge draw.   “Wherever you go there is one destination which is famous. If you visited in Manali, Rohtang is main attraction,” Vikram said. “Because of the snow.” 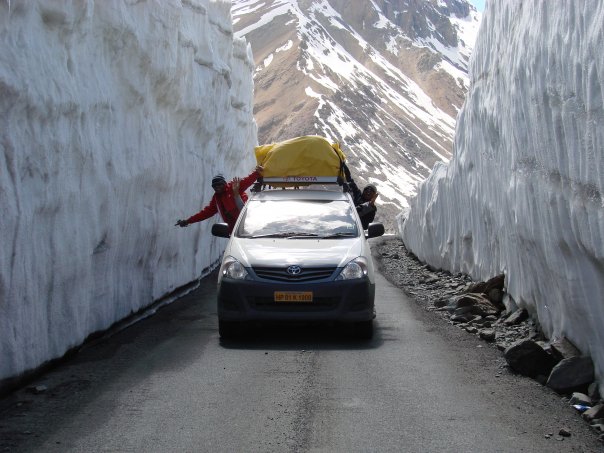 The Rohtang Pass hosts many more visitors now than it did a decade ago as rising prosperity in India’s middle class brings more tourists to this hill town. In summer months, more than 6,000 vehicles negotiate the narrow mountain road daily, making it resemble a clogged city street.

Vikramjeet , who has been living in Manali since past 20 years, says “Twenty years ago, we could count how many cars are here in Manali. Now if you come in season time, we do have traffic jam for  five to six kilometers on the Rohtang Road,” he added.

While tourists enjoy the scenic sight, environmentalists are cautioning about the swelling number of vehicles on snow capped mountains and nearby glaciers.

A senior scientist at the G B Pant Institute of Himalayan Environment and Development, J.C. Kuniyal, who is studying the Rohtang region said “temperatures in the Kullu valley have risen by about point six degrees centigrade. That is in keeping with the global trend.”

“But more worrying,” said Kuniyal, “is the impact of uncontrolled tourism on the fragile mountain ecology.”

“I have seen that the regions which are facing a high influx due to floating population or human activity, there aerosols are increasing,” Kuniyal said. “These are supposed to be the main causes to melt the Himalayan glaciers.”

The aerosols come both from diesel exhausts of vehicles and burning of wood for cooking by local people. The smoke deposits black soot on the glaciers, which makes them absorb more heat.

Even as scientists collate data to study the impact of climate change and human activity on glaciers, local people are witnessing it firsthand. Vikramjeet Singh Thakur of Pinnackle Adventure said he has been walking the mountains since childhood.

“When I was young, I have seen a lot of snow here, compared to that, this time we don’t have that much snow here. When I have been on the glaciers first time, I have seen lot of ice. We keep going every year, almost through the same routes, and I have seen that glaciers, they are receding,” he said. “There is a big change, in 15 years I have seen that big change.”

That retreat has raised concerns: these glaciers are the headwaters for rivers like the Indus and the Ganges that provide fresh water for millions of people in South Asia.

“If the present trend of gradual loss of net glacial mass continues, then over time the flow from the glaciers would reduce,” said Pradipto Ghosh, a director at The Energy and Resources Institute in New Delhi. “The lean season flow in the northern rivers which are fed by the Himalayan ice and snow cover, that would be reduced, but it would not be zero.”

Scientists said concerns are greater for communities living close to the mountain ranges than for those who rely on rain fed agriculture in the plains.

A  climate change specialist said that “It will impact their livelihoods quite significantly just by change in the water flow. Those communities, their agricultural system relies quite heavily on melt water coming out of the glaciers,” He added. “Changes in the melt water amount and timing also will have impact.”

For the time being, hill communities like those in Manali are not worrying. The surge in tourism is bringing more money, more jobs and higher incomes. New hotels are opening every year to accommodate the visitors. And so far a gushing river nearby provides plenty of water for the lush apple orchards carpeting the valley.

But some local residents like mountain guide Thakur occasionally worry about the consequences over time.  “Till I leave my life, we won’t be facing scarcity of water, but later on, the coming generation, will have problems,” Thakur said.

Environmentalists still are trying to establish how deep those problems may turn out to be.