Dehradun : The first batch of 43 pilgrims who had registered themselves at Guptkashi, left for the Kedarnath shrine which was thrown open to pilgrims today after it had closed following the holocaust of June 16-17, to the cries of ‘Jai Jai Mahadev’ and ‘Bam Bam Bhole’. Though there was optimism amongst the pilgrims as they began their arduous 24 kms trek from Sonprayag, the bad condition of the route and threatening weather are the biggest hurdles.

In fact, concern was voiced by none other than senior state Congress leader and union minister for water resources, Harish Rawat, who had undergone the trek just a day earlier, and said that if anything, the route was simply not fit for undertaking the pilgrimage and if the Uttarakhand government is serious on the char dham yatra of 2014, it will have to do a lot of work on the 24 kms trek that pilgrims will have to undertake from Sonprayag. 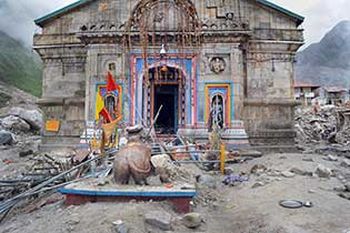 Asserting that the trek is a virtual nightmare at more than a couple of places where it requires more than guts and courage to cover the stretch, he said that at best the state government and its machinery had made a temporary arrangement on the route, and it was anything but safe for the pilgrims. “The state government will have to look for a safer and better route for the yatra when it commences next year”, he pointed out.

Not mincing words, Rawat said that need is to look for a safer and better alignment along which the pilgrims will have to trek as the alignment of the present route has been obviously done in a hurry without taking either the safety or convenience of the pilgrims into consideration.. “There is a lot of work and very little time as the area will be under snow in another month or so when no work on it will be possible”, he claimed.

In fact detractors of chief minister Vijay Bahuguna hastened to point out that he had taken the aerial route to Kedarnath shrine when he went there and so had the VVIPs who went for the special prayers at the shrine held earlier last month. Obviously neither does the chief minister nor do the VVIPs, including the ‘rawal’ (chief priest) of the temple and other official bearers of the temple committee know the condition of the trekking route yet the shrine has been opened for pilgrimage, they contended.

Though there are two stops at Bheemballi and Limcholi for the trekkers where there are medical facilities available and pre-fabricated huts have been put up where they can rest their tired limbs, but it is generally being felt that the state government should have put in some more work and time on the alignment and making up the trekking route for the safety of the pilgrims, rather than hurrying on it.

And amongst those who are undertaking the pilgrimage after the devastating tragedy, are some who have lost their near and dear ones in the June 16-17 holocaust. They believe that there may be some tell-tale signs or some indications with which they could trace the whereabouts of their missing loved ones, as the Uttarakhand government has not been able to account for the thousands that have gone missing after the floods hit the Kedarnath valley.