Dehra Dun: Concerned on the feedback, that there was almost no response from the tour operators of the country and pilgrims from different states for the char dhaam yatra, which is the backbone of the rural economy in the higher reaches of Garhwal division of this small mountain state, the Uttarakhand government has gone on an overdrive to emphasise upon the elaborate arrangements for the yatra this year. 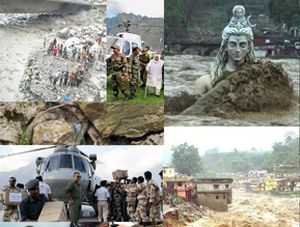 With Gangotri and Yamnotri shrines scheduled to open on May 2, the Kedarnath temple on May 4 and the Badrinath shrine on May 5 this year, the government intends starting the char dhaam yatra for these four major shrines in the Garhwal Himalayas in the first week of May. But concerned at the almost zero response that the yatra is getting this year and having got a feedback that there would probably be very little if no takers, emphasis is now on luring the pilgrims by assuring them complete safety.

It may be recalled that the tragedy of June 16-17 last year particularly in the Kedarnath Valley which left thousands dead and missing and property worth crores destroyed, has shaken the faith of the people from the mountains in general and the yatra in particular. Added to the natural tragedy of mammoth proportions was the ship shod manner in which the rescue and relief operations were handle post tragedy, which had put a question mark on the efficacy of the Uttarakhand government.

To undo the vast damage that has been done to both the yatra and the Uttarakhand government and somehow restore the confidence of the pilgrims from all over the country, the Uttarakhand government made a number of announcements hoping that it will help bring the pilgrims for the yatra. Prominent amongst these is the biometric registration of all pilgrims wherein they will also be issued registration cards carrying their photo identity and finger prints.

Scanners will be put up at various places in the control rooms, so that the exact location of any pilgrim can be known at the pressing of a button and also the number of pilgrims at any place at any particular time, which will help overcrowding at any particular township on the route. If required the yatra could be stopped lower down and more pilgrims stopped from reaching the places that are overflowing and thereby help overcrowding and putting extra burden on the existing  infrastructure.

The pilgrims will also be asked to give their cell phone numbers which will be fed at the control rooms and all important message ranging from the weather forecast to availability of accommodation, traffic jams and other vital information will be sent by SMS so that should they desire they can make necessary changes in the yatra plan and even stop short at any convenient place rather than being caught in traffic jam due to land slide or any other reason.

Despite this and the fact that the State Disaster Response Force, Border Roads Organisation and Uttarakhand Police will also be on an alert, tour operators have yet to get adequate response from the pilgrims, who are taking all the announcements being doled out by the Uttarakhand government with a pinch of salt. Infact the credibility of the Uttarakhand government and its babudom is at such a low amongst the pilgrims that the general feeling is that there will not be much at the ground level.

With corruption at  an all time high in this mall mountain state, the general impression that is doing the rounds is that though the government may have the best intentions as far as the yatra is concerned, but the deliverance at the ground level will be far from satisfactory. There are many who even doubt that all the promises of safety and security and the biometric registration may eventually not be in place by the time the yatra kicks off in the first week of May.

For just an example, a road connecting dang and Garia villages in Pauri district of the state was sanctioned sometime in 2011 and a sum of Rs 50.40 lakhs also sanctioned for it. On papers of the public works department the work on first phase of the road has been done and a sum of Rs 40.52 lakhs and work on the second phase is to begin shortly. The factual position is that nothing has reportedly been done on the road except for some minor works on which only a few thousand rupees have been spent.