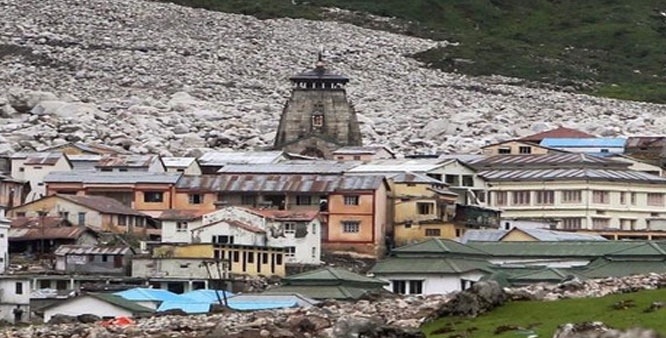 Dehra Dun : It took the tragic disaster of June16-17, in which thousands of people are still reported missing and hundreds were killed, besides the massive loss of private and government property that woke Uttarakhand to the reality of controlling the pilgrims coming to the four shrines of Badrinath, Kedarnath, Yamnotri and Gangotri, popularly known as the char dham yatra.

While the government used the number of pilgrims to increase their tourism figures and tout the lakhs of pilgrims as tourists to this small hill state, but there is no denying the fact that the yatra, by and large, was the very source of income to the thousands of small and big businessmen, right down from the dhaba owner to one running a multi-storey resort.

In fact thousands of labourers and mule owners on the yatra hot spots managed to earn enough for the year in the short period that the pilgrims were there. Many of the labourers were from the neigbouring Nepal, while there were others from adjoining and other states also. It would not be out of place to say that the yatra not only kept the cash registers ringing but the hearth of many houses lit.

As all this helped the economy, specially in the far flung higher reaches of the state, the successive state governments failed to realize that the yatra was a time bomb should a natural disaster hit the region. And it did with dire consequences, making all from the government machinery to the environmentalists wake up to the grip reality. But not before fingers were pointed at each other.

Thankfully, if the corrective measures are taken as is being proposed to form a Kedarnath Development Authority, which will not oversee the reconstruction and rehabilitation of the devastated regions in the Kedarnath Valley, including, Kedarnath, Ram Bara, Gauri Kund, Guptkashi and adjoining regions, but streamline the number of pilgrims on the char dham yatra.

Official sources here claimed that the blueprint of the new Authority is more or less made and it is likely to be announced in the next few days.

They said that the critical aspect would be whether the yatra should be allowed during the monsoons when there are heavy rains in the upper reaches of Uttarakhand, or should it be stopped for the period. The logic for this is the fact that there are a number of landslide and landslip prone zones, which pose hazards to both the pilgrims and the state government in organizing relief and rescue works.

However, sources said that the help of the meteorological department in this regard was also being considered, and brakes could be put on the yatra, by stopping the pilgrims where they are should heavy rains as that on June 16-17 be predicted. But the other view was that this would only concentrate the pilgrims at certain strategic areas and should a similar catastrophe hit the region it could be devastating.

They said that as of now thw focus is on reconstructing the devastated region and preparing a blue print for the yatra of the future by holding discussions with various stake holders, including scientists and environmentalists. “One thing is for sure that the yatra will be regulated and the number of pilgrims limited to a certain number, which has to be reached upon”, they added.