Srinagar: With two incidents in two weeks, and a chief minister passing the buck to the army and to the separatists, peace or the modicum of it in Jammu and Kashmir has been severely jolted once again. 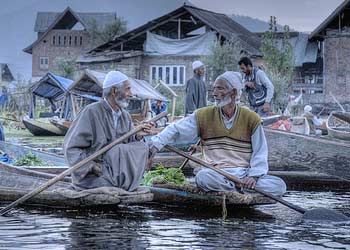 Tensions had heightened in summer capital Srinagar last week after eight army soldiers were killed and 13 injured in a deadly guerrilla ambush June 24 on the heavily guarded Srinagar-Muzaffarabad highway.

The attack shifted focus to renewed militant violence in a city believed officially to be free of militancy, which had been prompting Chief Minister Omar Abdullah to advocate revocation of the controversial Armed Forces Special Powers Act (AFSPA), at least from the Srinagar and Jammu capital cities.

This was followed by the killings of two youngsters in north Kashmir’s Bandipora district on Sunday in a firing incident the people accuse the army of.

While 18-year old Irfan Ganai was killed when he came out of his home around 3.30 a.m. on Sunday morning allegedly during an army ambush, 28-year old Tariq Ahmad Laharwal was killed in the second firing incident during the protests that followed Irfan’s death in Markundal village of Bandipora district.

Abdullah has literally expressed his “helplessness” over the killings of the two youngsters, although he said investigations were on to find out the truth.

Talking to mediapersons on the sidelines of an official function, Abdullah, when asked about who killed the two youngsters, said: “I think you should pose this question to the army”.

He, however, added: “I won’t go into specific details. This is the job of the police and other investigating agencies.”

He also chose not to comment on the much hyped AFSPA revocation he has been championing for the last three years.

“I won’t talk about the AFSPA right now because two incidents in the recent past have given credence to voices both for and against the revocation.”

There have been localized protests in the villages of Bandipora district after Sunday’s incident. The authorities had to change the north Kashmir route of the Amarnath Yatra which had been proceeding through the Srinagar-Sumbal-Baltal highway till June 30.

The Yatris are presently taking the Srinagar-Ganderbal-Baltal route to reach the north Kashmir base camp.

Despite the tensions that have been building over the two incidents, and another fierce gunfight in south Kashmir on July 1 in which three guerrillas and a local policeman were killed, the annual Amarnath Yatra has been proceeding without a hiccup.

The comparatively fewer number of pilgrims so far for the Himalayan cave shrine is attributed to the Uttarakhand flooding that claimed hundreds of lives in the Alaknanda and Mandaikini valleys.

“The number of pilgrims for the Amarnath Yatra is likely to pick up in the coming days,” said an official of the Shri Amarnath Shrine Board (SASB) that manages the Yatra.

The official also said following strict compliance of Supreme Court orders, no unregistered pilgrim is being allowed to proceed towards the two base camps of Baltal in the north and Nunwan (Pahalgam) in the south of the Valley this year.

As reports of guerrillas planning fresh infiltration from across the Line of Control (LOC) into the state appear in the media, peace remains fragile and deceptive in Kashmir, where governance and official authority have been following an inverse relationship with violence during the last over 23 years.