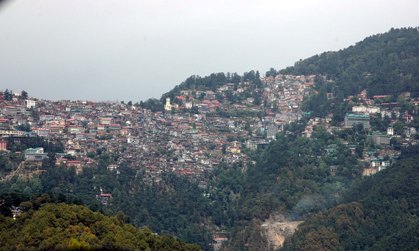 Shimla: Apathy of Shimla municipal authorities in providing basic amenities to the citizens were brought out by the Comptroller and Auditor General (CAG) report that was released recently.

Funds marked meeting out adequate civic amenities to the public have been diverted to for paying salaries, office expenses, wages and contingent expenditure that should have been instead met out from its annual budget, the reports states.

An amount of Rs 32.41 crore that was lying unspent in March 2008, even as numerous works remained incomplete, by June 2009 an amount of Rs 16.89 crore had been spent for meeting salaries and other establishment expenditures.

None of the 189 development projects like link roads, toilets, parking slots and parks for which funds to the tune of Rs 2.73 crore had been provided from the year 1992-93 to 2006-07 had been completed, the auditor says.

Response of municipal executive engineer recorded in the report says â€œthe department could not spare time for execution of these works since it had other priorities.â€

Emergency ambulances roads to 15 MC localities for which Rs 23.50 lakh had been provided during 2001-08 had even been taken up by September 2008, the report points out. However, the principal secretary (urban development) response incorporated in the report mentions that by June 2009, nine such roads had been completed.

For collecting the about 60 tons of garbage the city generates per day, the municipal corporation had deployed 186 open dustbins and 206 dumpers of which only 35 were being lifted on a daily basis. The rest were being lifted at 2 to 15 day intervals.

Commenting on it , the report states â€œdue to non-lifting of the garbage on a daily basis, the dustbins were overflowing and garbage was scattered all over the place.â€

The Municipal engineers response while accepting that water supply was not adequate to meet the citys needs pointed out that during the lean period (April to July), water supply decreased by as much as 40 percent, whereas demand increases due to tourist inflow.

To meet with such crisis, water supply was provided only on alternate days.