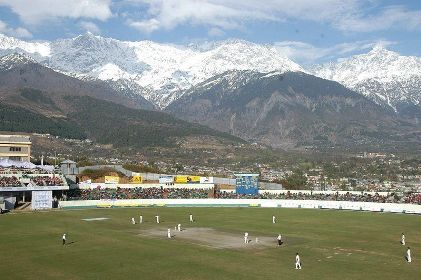 Shimla: In an hourâ€™s time Himachal’s showcase to the cricket arena, the Dharamshala stadium would be inaugurated with the popular Indian Premier League (IPL) match between Deccan Chargerâ€™s and Kingâ€™s XI Punjab that would be watched even by Lalit Modi, fresh from having warded off the taxmanâ€™s call at his Mumbai office on Thursday night.

In the backdrop of the Lalit Modi-Shashi Tharoor spat over the Kochi franchise bid whereby Sunanda Pushkar has landed up with a â€˜sweat equityâ€™, the governing council of the league is expected to hold a informal meeting at Dharamshala about the recent developments and the taxmanâ€™s call.

The controversy did stall parliament earlier in the day, as the opposition sought the resignation of Tharoor from the council of ministers.

On his arrival at Gagal airport, Modi a little while ago told reporters that there were no differences of opinion in BCCI.

â€œWe are here to witness the match,â€ he said.

The stadium built at a cost of about Rs 50 crore has a sitting capacity of 20,000. Set up high in Himalayan lands at an altitude of 4000 feet, it is perhaps the one of the few Indian international level cricket stadium located in the very scenic locale.