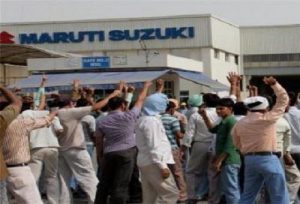 “We will not allow the meeting,” the sarpanches said in their letter.

“The meeting has been called by sacked Maruti workers and their families. The Gurgaon Maruti plant is not connected with the meeting,” Kuldeep Janghu, general secretary, Maruti Udyog Kamgar Union, told.

Violence had erupted July 18 after a suspended Maruti Udyog worker at the Manesar plant allegedly slapped a supervisor. A senior executive was killed and over 100 people were injured in the violence.

After the incident, the company sacked nearly 2,500 workers. Of them, 147 workers – including then union leaders – were jailed and are facing trial.

Workers want their jobs back and a Central Bureau of Investigation inquiry or a probe by a sitting judge of the Punjab and Haryana high Court into the incident.

The plant is now functioning with new staff.