Dharamsala/Bylakupp: Thousands of Tibetan exiles today morning assembled in Dharamsala and Bylakuppe — the first in Himachal Pradesh, the second in Karnataka — to celebrate the 78th birthday of their spiritual leader the Dalai Lama. 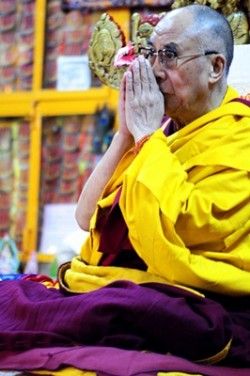 “Exiles, monks and well-wishers are joining the birthday celebrations. Prayers for the well-being and long life of our spiritual leader began,” an official of the Dalai Lama’s office told in Dharamsala, the headquarters of the Tibetan government-in-exile.

He said the Dalai Lama would be participating in functions in Bylakuppe, one of the largest settlements of the exiles in India.

Special prayers began at the hilltop Tsuglagkhang temple close to the official palace of the Dalai Lama at McLeodganj near Dharamsala.

Born on July 6, 1935 at Taktser hamlet in northeastern Tibet, the Dalai Lama was recognised at the age of two as the reincarnation of the 13th Dalai Lama Thubten Gyatso. He fled Tibet after a failed uprising against Chinese rule in 1959, basing his Tibetan government-in-exile here.

He was awarded the Nobel Peace Prize in 1989 for his non-violent campaign for democracy and freedom in his homeland. Ever since he fled to India, he has spent his time in exile pushing for autonomy for Tibet.

The 14th Dalai Lama, Tenzin Gyatso, has been following a “middle-path” policy that seeks “greater autonomy” for Tibetans rather than complete independence.

The Dalai Lama has increasingly voiced his frustration with the ongoing self-immolations in Tibet and said, “these drastic actions are the symptom of a cause, which the Chinese authorities should investigate and take steps to resolve”.