Panaji: Bullied by a herd of wild elephants and down to their last rations, Nobel Prize-winning writer Ernest Hemingway, his wife and a pilot were rescued by an Indian expat after their plane crashed in east central Africa in the 1950s, the savior’s son has said. 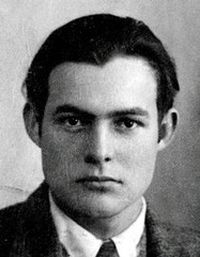 The legendary American writer, who made the bloody bullfights of Pamplona and the rugged African wilds legendary through his iconic fiction and essays, was flying over the Murchison waterfalls when his plane, a Cessna 180, crashed after hitting a telegraph pole, stranding him and his companions in the wild, with irate elephants on land and a river full of crocodiles to deal with.

Goan by origin, Gino Abreo, who now leads a retired life in Nicosia, Cyprus, says it was his father, the late Edwiges Abreo, who skippered a luxury boat, SS Murchison, that was passing by, who rescued the Hemingways and the pilot and brought them back to habitation – a village called Butiaba by a river pier in present-day Uganda.

“He received a signal from his head office to check the area as my father’s ship was very close to the location of the crash near Murchison falls in Uganda,” Gino Abreo, 69, told in an email conversation.

Without naming him, Hemingway has immortalised Edwiges Abreo in his book “By-Line Ernst Hemingway: Selected Articles and Dispatches of Four Decades” by vividly mentioning him and the rescue.

It was a series of ‘Mayday’ messages sent by Hemingway’s pilot, Roy Marsh, which made Edwiges Abreo look out for the celebrity couple, who were presumed dead by the international media which had heard of the crash.

“He was made aware of Hemingway’s eminence through the radio call he received saying it was a very famous American author and his wife who were presumed dead and to carry out a search party anyway,” said Gino Abreo, recounting the story his father had often narrated to his family over the years.

Edwiges Abreo’s boat, the SS Murchison, had also had a brush with Hollywood, says Hemingway.

“It was a very beautiful launch, fairly old-fashioned in lines, and we later found that it was the vessel which had been used in the motion picture called The African Queen, which starred two intrepid characters called Katharine Hepburn, who has my great admiration, and Humphrey Bogart, whom I have never yet seen in real life,” Hemingway wrote in his book.

With his ration of four Carlsberg beers, a bottle of Grand MacNish Scottish whisky and a few apples petering out, Hemingway wrote that the sight of the Edwiges Abreo-skippered boat was a “pleasurable experience”.

Similarly, the tryst with the Hemingways too was a “pleasurable experience” for the Abreos who had moved to Africa from Goa, shortly before the First World War. But Gino Abreo does wish that his mother had saved the fishing rod that Hemingway had gifted his father as a memento of the man who wrote the epic “Old Man and The Sea” about an old sailor who fights a large, tenacious Marlin he has hooked.

“My mother told us that Hemingway gave my father his fishing rod. However, in those days, it meant nothing to my mother, who was a housewife with very little education behind her. Years later, she told us that she gave it away when she left Kenya to settle in the UK not realizing the significance of it,” Gino Abreo said.

He still has with him a 1954 clipping of The New York Times which carries an Associated Press report of Hemingway and his rescue and a scrap of paper from Hemingway’s book where one of the greatest writers of all times describes his father.

Other than that, the only other memory of the Hemingway rescue are the stories that his father used to narrate to him and his siblings.

And of course, the great writer’s fishing rod which was scrapped!