New Delhi: Delhi woke up to a thick blanket of fog Friday with low visibility hampering air, rail and road traffic. More than 80 flights were delayed, several trains cancelled and road traffic was forced to slow to a crawl. 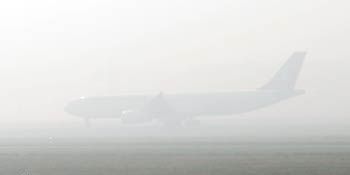 Minimum temperature settled a notch above average at 7.6 degrees Celsius. At 8.30 a.m., visibility was reduced to 100 metres.

An official of the India Meteorological Department (IMD) said visibility would improve later Friday. “Though sun will come out later in the day, it won’t give any respite from the cold winds. There will be a light veil of fog in the evening,” the IMD official said.

“About 86 flights have been delayed overall, including domestic and international flights. There were no take offs since 6 a.m., and only a few flights were able to land,” an official at the Delhi International Airport Limited (DIAL) told.

According to DIAL, one flight from Abu Dhabi and another from Dammam, capital of the Eastern Province of Saudi Arabia, and a Lufthansa flight from Munich, Germany, were diverted to other cities between 5.30 a.m. and 7.30 a.m.

A railway official said 10 trains were cancelled and 17 delayed because of thick fog.

“Over 17 trains were running behind schedule by several hours, and 10 have been cancelled. Two trains have been rescheduled. Dense fog across many parts of north India today (Friday) affected rail services,” a Northern Railway spokesperson said.

Motorists had a tough time steering through foggy roads of the capital.

Sandeep Dutta, who drives a school van from Noida to Delhi, said: “There was dense fog, it was difficult to drive.”