Once considered as the gawky art of inking the skin, tattoos are no longer looked down upon as the outcast emblems for goons and thugs. Youngsters today, are often seen sporting images of gods and goddesses, inked deep into their skins, giving expression to their spirituality. 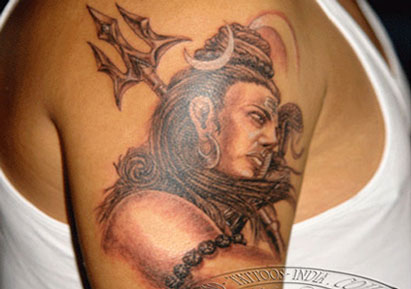 Even fancy butterflies and flowers have become ancient; it’s the era of creativity, manifest an idea in your mind, and soon you’ll see it inked on your skin for an eternity.

India tradition in particular has always celebrated the art of tattooing. We all know henna is also a form of tattoo, but it gets washed with time. Many tribes in India sport permanent tattoos.

The most famous with a prominent history is the Godna Tattoo. The Godna tribal people believe that manmade ornaments are mortal and are left behind once we die, but a tattoo is a permanent ornament that will travel with us even after death. This belief holds good for every tattoo person till date.

Some time back tattooing had become exclusive to mainstream wrestlers and the angry revolutionary anti-social geeks, but that was past. Look around, and one can see some serious rustic, spiritual, religious, political, and mythological designs being flaunted on arms, necks, ankles, occupying spans of flesh in colors ranging from black, blue, purple, golden, yellow, pink, red, and others.

Upfront, this seems like another fashion accessory, but the young Indian generation is taking the art more seriously. They understand that a tattoo is not just a matter of style today, but a permanent mark that will live forever.

So while we see many people getting the names of their boyfriends, girlfriends, husbands and wives tattooed on their body, many are skeptical about a change in their partner, and avoid this mistake. Yes, laser removal technique is available, but even that may leave a black mayhem behind.

Also, interestingly tattoo art is becoming bolder with every passing day. Not just in terms of designs, but also in terms of the places where people are getting them inked.

Tattoo artists reveal that many people are opting to get the name and image of their partners tattooed on their private parts. Seems gross, but that has made many people the talk of the town.

When asked why people choose these spots, the answer we get is simple-because they all want to be different and are not ashamed of sporting a tattoo in parts where most others wouldn’t dare to poke a pin, let alone get a tattoo.

Coming back from the extreme form of tattoo art, even regular teenagers and young adults have not escaped its allure. These people seek meaning, and want their most valued ideologies, and inspirations to be with them all the time.

One can easily spot a Buddha, Christ, Shiva, Krishna; and scenes from Ramayana, Mahabharata, or famous Hindu chants all inked over arms and back.  Self-expression without words is the concept that’s gaining popularity.

Another trend that is picking pace is UV tattoos. These tattoos glow in the presence of UV light. The glitz and glamour around these tattoos is attracting more and more people to get them embossed on their skin.

They come at a greater expense than ordinary tattoos, the cost being roughly Rs.1500 per square cm. The added advantage of these tattoos is that they aren’t visible without UV lights, so you can always keep them hidden from your parents.

Surprisingly, when the art of tattooing first became popular in India, people were more motivated to display their might in tolerating pain. This fortitude inspired many others to do follow suit.

And, today the craze has surpassed all boundaries of shyness and fear. The concept is still new, and this is evoking excitement among people to get one done before it becomes common folklore.