Jammu: The 55-day-long pilgrimage to Amarnath, the holy Himalayan cave shrine of Lord Shiva in south Kashmir, will begin from June 28 this year and no pilgrim would be registered without a health certificate, the shrine board decided Thursday. 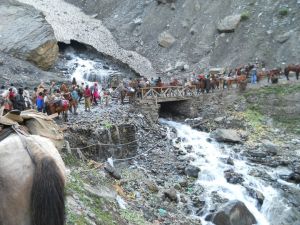 The decision was taken at a meeting of the Shri Amarnath Shrine Board (SASB), presided over by its chairman and Jammu and Kashmir Governor N.N. Vohra in New Delhi on Thursday, said the board’s spokesman in a release issued here.

The Himalayan cave shrine is located at a height of 13,500 metres and approachable by two routes – Pahalgam and Baltal. The traditional Pahalgam route involves a trek of 46 km from Pahalgam tourist resort 100 km south of Srinagar. The route from Baltal, 110 km north of Srinagar, is shorter but quite steep and arduous trek.

The shrine board directed its CEO to issue very clear advisories informing every intending pilgrim about the requirement of obtaining the prescribed compulsory health certificate from the authorized doctors/medical institutes.

The CEO was also told to compile state-wise lists of authorized doctors/medical institutes and upload the information on board’s website,www.shriamarnathjishrine.com.

Last year, over 100 pilgrims died while performing the pilgrimage. A group of doctors tasked to find the reasons reported that most of the deceased had either produced fake medical certificates or had not followed the rules. The Supreme Court also took cognizance of the high number of deaths and asked the authorities responsible to ensure better arrangements for the pilgrimage.