Shimla: It’s status quo for Shimla’s historical Annandale ground, the picturesque flat highland that could have well become a cricket stadium, with Himachal Pradesh Chief Minister Virbhadra Singh declaring that it would stay with the army – as it has since 1941. 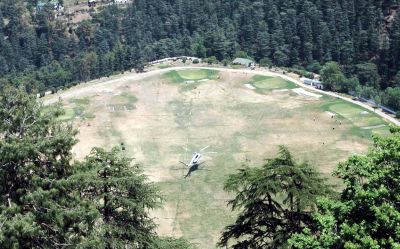 Stymieing the previous Bharatiya Janata Party (BJP) government’s moves, Virbhadra Singh said this week that the Annandale ground, in the army’s possession since 1941 when World War II was raging, would not be taken away from the army’s protective cover. The ground, he said, had strategic value and compromising with it could impact security.

“The government will remain the custodian of the ground but it will remain under the army’s control. Since it is of strategic importance, it cannot be compromised,” Virbhadra Singh told.

The 121-bigha (one bigha is 0.4 hectare) flat highland ringed by dense groves, just three kilometres from Shimla’s Ridge, was a bone of contention between the previous Prem Kumar Dhumal- led government and the army. The government had initiated the move to take over its control and hand it over to the Himachal Pradesh Cricket Association (HPCA), headed by Anurag Thakur, a BJP MP and Dhumal’s son, for constructing a cricket stadium there.

According to Virbhadra Singh, top political functionaries of the previous government under the guise of developing a stadium were aiming to grab prime land surrounding Annandale ground.

The controversy came to end Monday when Lt. Gen. Sanjiv Chachra, General Officer Commanding-in-Chief Western Command, called on Virbhadra Singh, who took over the reins of the state Dec 25 last year. Immediately after the meeting, the chief minister said status quo would be maintained.

Official sources said Lt. Gen. Chachra stressed that the Annandale ground was needed for many army operations. He also drew the chief minister’s attention to an arbitration case pending before the divisional commissioner of Shimla over the ‘legality’ of the army’s claim over the ground.

The chief minister, soon after the meeting, issued directions to withdraw the arbitration proceedings, a government official told.

The tussle flared up last April when the Western Command inadvertently sent a statement on the Annandale ground to the media.

The unsigned note, which was not meant for distribution to the media but only for internal circulation, said the state government “seems to be hell-bent on destroying the meagre existing forest cover, all at the behest of land mafia, eyeing phenomenal profits, which the (proposed) cricket stadium project would bring”.

Subsequently, at a meeting of chief ministers on internal security in New Delhi in April last year, Dhumal took up his government’s row with the army.

He had said the ground “is in the illegal possession of the defence authorities as its lease had expired many years back”.

Various sports organisations and local residents under the banner of the HPCA took out public rallies in Shimla, seeking the ground’s transfer to the local administration.

The Annandale ground was on lease with the army, but the lease was not renewed after 1982. However, the state continued to accept the lease money till 2002.

Historians say the Annandale ground has a glorious past. It was once used by the Durand Football Tournament Society set up in 1888.

Author E.J. Buck wrote in “Simla Past and Present” that Major Kennedy, a British officer, was so struck with the ground’s beauty that he named it after Anna, a young woman he was in love with back home. Dale, or a meadow, was tagged on to her name to make the ground Annandale.