New Delhi: Jantar Mantar, the 18th century architectural observatory in Delhi, and Nelson Mandela’s Freedom Towers in Soweto in South Africa made a connection with light this week when Patrick Rimoux illuminated the ancient astronomical lab with psychedelic light sculptures. 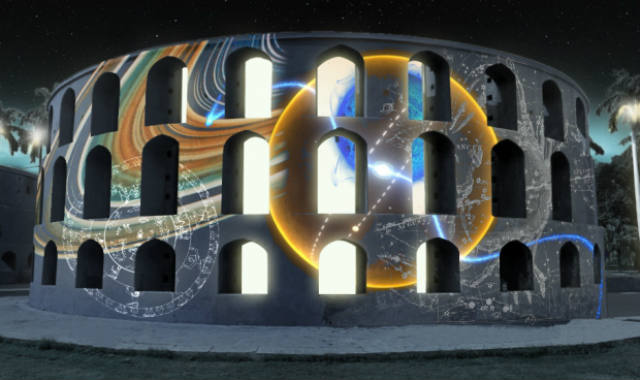 The multi-coloured astro-sculptures “Luminosity” at the 400-year-old Jantar Mantar was an Indo-French arts collaboration for the ongoing BonJour Festival in India.

“I draw my inspiration from Nelson Mandela and Mahatma Gandhi,” said the avant garde French light artist, who has exhibited around the world.

Rimoux, 55, had designed the light towers commissioned by Nelson Mandela in 2005 at Kliptown in Soweto in Johannesburg in memory of South Africa’s freedom struggle.

Rimoux said he “spent six years working for Nelson Mandela in Soweto, designing the light art installation where Mandela and the Congress of the People had signed the freedom charter beginning the battle to end apartheid in 1955”.

“Mandela’s incredible energy even while in jail inspired me. Johannesburg was special because it was there that all the South African civil right icons like Mahatma Gandhi, Nelson Mandela and Walter Sisulu had spent time,” said Rimoux.

“Each tower reflects the nine states of South Africa. Earlier, South Africa had five states but after the abolition of apartheid, the number went up to nine,” Rimoux said.

Light sculptures, a new age installation genre, are fluid shapes that melt and merge into each other on flat solid surfaces.

Artists like Rimoux map the surfaces at least a year in advance and then visualise the imagery to gel with the structure. The digital imagery is fed into a computer and connected to a projector which beams the images.

“The genre is still in infancy with barely 20 reputed practitioners around the world,” he said.

Rimoux, who had exhibited at the India Art Fair 2013, is preparing to work at the Jaipur City Palace. “I will light up a specific area,” the artist said, adding that he wanted to “light up the Qutab Minar, Delhi’s symbol of freedom, as well”.

British LED light artist Robert Montgomery – who crafts poetry, graffiti and texts in light and fire – has created light poetry about the maritime history of the southern outpost for ongoing Kochi Biennale. 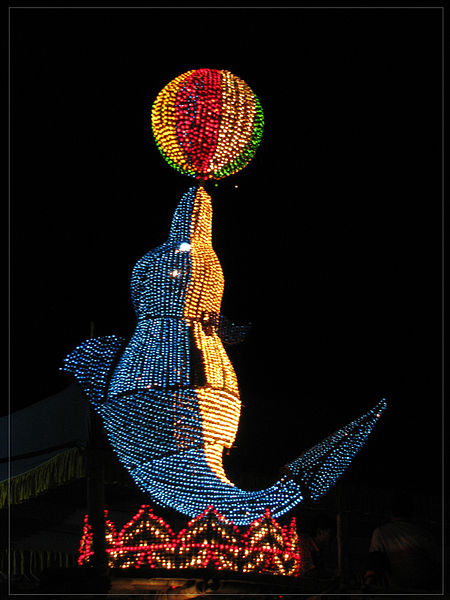 “My poetry hangs in a trail of light outside the Aspin Hall House, the biennale venue, facing the sea,” Montgomery said.

In September 2012, AGB Events, an Australian arts management company that hosts the Vivid Light Festival in Sydney, brought to India a three-dimensional light sculpture show at the 16th century Purana Qila during the Oz Fest.

The multi-coloured laser light show, the first of its kind in the capital, recreated the history of the fort with images of Islamic rule in India and fragments of Islamic art and architecture at the Sher Mandal at the Purana Qila, or the Old Fort.

American new media artist Janet Echelman uses an ancient Indian symbol – the fishing net – as the primary material for her abstract public light art that floats in the air.

While in India a few years ago, Echelman lost her paints and was inspired by fishermen hauling their giant nets at Mahabalipuram. She began to mould the nets into abstract shapes, colour them, pass light through them and hitched them in the air like a fisherman’s haul. Her spectacular net light sculptures are exhibited worldwide.

The tradition of light sculptures in India dates back to the sound and light shows at the heritage sites during the 1970s.

The hub of traditional LED light art in India is Chandannagar, an erstwhile French colony in West Bengal that has carried Indian light motifs across the world.

“We still practise the traditional method of arranging lights on wooden frames into patterns and lighting up the panels in the old fashioned way. Light sculptures have become digital worldwide,” said an artist from Chandannagar, who sculpts in the capital during the festivals.