If not anything, Girls of Riyadh does do one thing with absolute conviction: Tell the story of each and every girl born in Saudi Arabia with ease and elegance.

The book convincingly narrates the story of four girls, belonging to what can only be described as the crème de la crème of the Saudi Arabian society over a period spanning six years through a series of e-mails anonymously sent out to the world. Right from their tryst with education to their misfortunes when it came to love, Girls of Riyadh gives the reader a peek into the lives of these four women, as they live through their youth, stumbling along the way.

What the book is effective in bringing out, in its very essence, is the mentality that prevails and rules the Saudi Arabian society even today. It talks about how ancient customs and narrow-minded thinking shrouds modern sensibility; and conservative attitudes that are more often than not the cause for dreams that lose their sparkle, or ambitions that fade into nothingness.

The book brings out how the girls learn to grasp every sliver of freedom and independence that comes their way given the staunch repression their lives are filled with. It effectively discusses their dreams that are nipped at the bud or heartbreaks that arise out of disapproval from the norms laid down by the society and years of conformist thinking that has made even the men of modern Riyadh chauvinists. 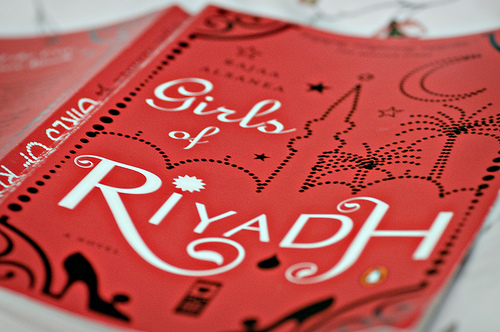 The author makes a shaky attempt at clearly defining the characters that after a few pages into the book all begin to resemble one another. Although they each bear different traits, their encounters and experiences throughout the book make it hard for the reader to distinguish one from the other.

The storyline flows smoothly and the narrative glides along in the beginning of the book. However, after a point, each of the characters is undergoing the same experiences making it traumatic for the reader, to read through the repetition, making for a painfully slow pace towards the end.

That said, the writing heavily leans towards typical chick-lit. Peppered heavily with local slang and verses from the Qur’an and other Islamic spiritual texts, the author tries to add authenticity to her writing, being quite successful in portraying the setting in which the story is crafted.

Through the clever use of the email format, the author is able to also communicate to the reader not only the story of these four girls, but also the responses the anonymous writer garners for undertaking such a ‘bold’ project. In this sense, the reader is hit with multiple examples of what the average Saudi Arabian’s reaction would be like to each of the instances and how each girl is fed up of the circumstances and restrictions she has to deal with at every waking moment.

All in all, Girls of Riyadh is successful in making the point it’s trying to make: that even though we live in the 21st Century, life for the girls in Riyadh is nothing short of a nightmare. With a society that is nauseatingly proud of its conservatism, Rajaa Alsanea is successful in conveying this sentiment, without being preachy or sermonising the reader. But behind the breezy, chick lit lacquer; the book is praiseworthy as it gets the reader to think of the larger issues and most of all, to read between the lines.