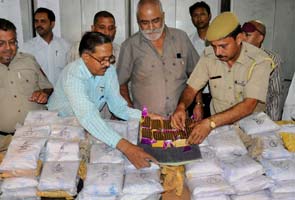 Amritsar: In the biggest seizure of heroin so far, customs officials here Monday seized nearly 105 kg heroin from cement bags that arrived from Pakistan on a goods train.

Customs department officials said this was the single biggest seizure of heroin at the railway dry port.

The heroin is valued at over Rs.525 crore in the international market, the officials said.

The officials also seized over 500 rounds of ammunition.

The ammunition was meant for use in .397 bore weapons.

India and Pakistan do limited trade by train and trucks through the Attari-Wagah land route border, 30 km from here.

Heroin and other drugs have been seized by customs and other agencies from cement bags earlier also. India has been importing Pakistani cement for over two years now.

This year, the BSF alone has recovered over 210 kg of heroin along the international border.