The days competition started out at Manali and ended at Kaza in Spiti valley.

The Chandigarh based team of Harpreet Bawa and Kashyap, in a Maruti gypsy, who were leading on day one, dropped to third place on the second day with a penalty time of 3.13.37.

Yesterday it was Helmut was leading the rally in the motorcycle X-treme category. 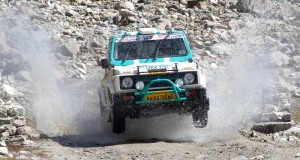 Riding Polaris bikes, at end of Day two, a neck and neck race was on between Raj Singh Rathore with a penalty time of 3.16.25 and Jes David with a time 3.17.21, who were in third and fourth position respectively.

In the Adventure Trail category with Mysore rallyist K Prasad in the driving seat and Chandrashekha navigating the Maruti Grand Vitara, they went passed the top five rallyists on the opening day to be in the lead by end of day two.

With a penalty time of 1.29, Prasad- Chandrashekha team were top in Adventure Trail category followed by the Pune speedster Sanjay Takale and Musthafa in a Tata Safari and a time of 1.43 in second position.

Satoskar and Natarajan in a Mahindra Scorpio with a time of 2.38 were in third place, S Chand and N Mehta in a Tata Safari with a time of 2.52 were in fourth place and Padia and Sekar in a Pajero and a penalty time of 3.10 were in fifth position in a Adventure Trail category on Day two.

The day was not without its share of drama and a helicopter had to be pressed into service when two vehicles did not get to their check posts on time.

When Raid Marshals noticed that Amittrajit Gosh, winner of the 2012 Mughal Rally, did not reach the Chhatru post after starting out the 8 Km competitive stretch from Gramphoo along Chandra River valley and Along Aiyer, who hails from Nagaland who was untraceable Chhatru and Chhota Darra, a heli search was asked for early in the day.

“In five minutes it was found that both vehicles had suffered a mechanical breakdown,” said Vijay Parmar, president of Himalayan Motorsport, who led the search operation. “With a dedicated helicopter on standby, the operation saved 20 minutes of Raid time,” he added.

On Day 3, the vehicles set out early to do a loop in Spiti Valley and would end the day back in Kaza.

Covering a total distance of about 1800 Kms with over 600 Kms of competitive sections, the 6 day Raid ends at Leh.