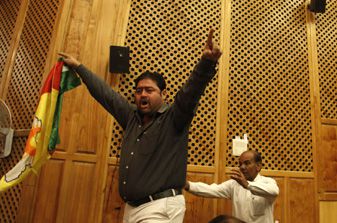 Srinagar: Much to the surprise of everyone, for the first time in the history of J&K legislature, three youth jumped in the house of assembly who were already in the public gallery to protest against the lack of employment policy here.

Eyewitness said that they jumped into the house and one of them even tried to reach the well of the house but was captured by the marshals.

The youth who have been identified as Manish Gupta, Sunny Malhotra and Ambedkar were arrested and put in a room in the assembly complex.

Speaker, Legislative Assembly, M.Akbar Lone sought a report from the concerned officials to provide him all the details about the members who have been given entry cards.

Later on, the speaker revealed the identity of member who had issued passes to these youth, “It is very unfortunate that one of the senior members Jagdish Raj Sapholia had issued the passes to the activists of Jammu Kashmir Democratic Front”.

Lone also showed the snatched flag of the party to the house and immediately directed action against Sapholia.