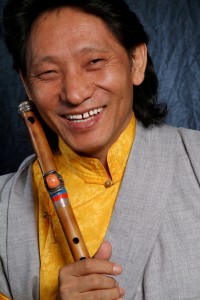 New Delhi: Nawang Khechog, a nomadic tribal of Tibetan origin, has clung to his wooden flute for the last five decades since his family fled Chinese repression to make Odisha in India its home.

Khechog, who has performed with bands such as U2 and was nominated for a Grammy Award in 2000, was only six at the time the family fled Tibet in 1959 – about the time that spiritual leader Dalai Lama also made his escape. But the memories of the flautist are vivid.

A travelling yogi had predicted “bad times ahead for the family and advised them to leave for India”. And the family came to the “warm hospitality that India offered”, Khechog, who now lives in Colorado, US told IANS.

Khechog says he has used his flute as a bridge across Buddhism, Hinduism and the West – and a symbol of “spiritual awakening” which eventually led him to study faith with the Dalai Lama. He has been a practising Buddhist monk for the last 11 years.

The musician, who was in India to perform at the World Flute Festival last week, is collaborating with Indian theologians to create a workshop module for Bansi Yoga, a form of music therapy with flute as the healing instrument.

“I have been told to organise an awakening kindness tour and workshop to teach ‘bansi yog’ with scholars from SVYASA University. ‘Awakening Kindness’ is the essence of my spiritual philosophy and the name of my book. Bansi Yog is an Indian form of yoga and in Buddhism, spirituality is kindness and compassion. Together, they make a powerful healing combination,” Khechog said.

The musician said Bansi Yog – spiritual calm with music – came to him naturally. “I was playing the flute the way I felt – naturally without any grammar or training. I gradually began to feel spiritual. Buddhist meditation taught me universal love and compassion,” Khechog said.

Khechog plays the bamboo, wooden and sometimes the clay flute “known as the ocarina, the ancient version of flute”.

The musician, who was nominated for a Grammy Award for “In a Distant Place”, a flute orchestra album with American roots musicians, has been lately connecting to India more intensely than before.

“I have recorded some of my father’s songs that he sang 30 years ago. He is a nomadic singer. I told my sound engineer in the US to polish the songs that I had recorded on a cassette years ago. I realised in course of my visits that he was a good musician,” Khechog told IANS.

The musician’s father lives in a Tibetan settlement near Behrampur in Orissa.

Some 140,000 Tibetans now live in exile, over 100,000 of them in India. Over six million Tibetans live in what is now known as the Tibet Autonomous Region.

“I have also visited Mathura, Krishna’s birthplace, twice. I bought a special black flute and played inside the shrine by a big dark stone where Krishna was born. There is hardly a god in the Indian mythology who plays the flute. I had to pay homage,” Khechog said.

In the Tibetan religion, “there are different goddesses and consorts of Manjushree (Swarasati) who play the flute”, Khechog said. “Flute is a big part of Tibetan culture, especially among the nomadic people in the high plateau, for thousands of years. Boys play the flute when they herd their yak and sheep,” the musician said.

Khechog said he “ended up going to Australia in 1986”.

“I was playing with bands and people responded very vigorously. During a concert in Sydney, the band I was supposed to play with did not turn up because my music had blown them. They wanted to listen to my music.”

In later years, America has given Khechog his share of limelight and powerful patrons. “I have worked with Brad Pitt in the movie, ‘Seven Years in Tibet’ as a co-actor, assistant director and musician. Brad and I have developed good rapport over the years,” he said. Khechog has also composed music for “Tibet: By the Snowline”.

“I have has performed with leading contemporary bands like U2, Red Hot Chilli Peppers and Beastie Boys at Tibet Freedom concerts in New York and Washington,” the musician said.