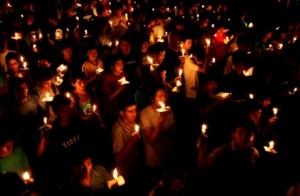 Attari (Punjab): As the midnight hour approached, Indians and Pakistanis faced each other across the border holding candles to reinforce the spirit of harmony and shared heritage in troubled times.

It was to celebrate the birth of one nation and 66 years of independence from British rule for another.

Citizens from both sides make a tryst with peace at this border checkpost every year on the midnight of Aug 14-15.

About 100 people gathered at the road border, about 30 km from Amritsar, shouting slogans like “Hind-Pakistan Maitri Zindabad”, “Pakistan Zindabad” and “Hindustan Zindabad”.

Another slogan which rent the air was “Bhai ko bhai se milne do” (let the brothers meet).

The crowd, including women and children, cut across all age groups. Troopers on both sides had decorated the respective sides of their border posts to mark the occasion.

“Every year during the midnight of Aug 14-15 people from India and Pakistan place their candles on ground zero (on the border) to express their solidarity for each other,” Commander Sumer Singh told IANS.

Sweets are exchanged and so are greetings.

“Pakistani soldiers send us sweets like ladoos on Aug 14 and we give them sweets in exchange. The exchange also happens on Holi, Diwali and other festivals,” he said.

The candlelight vigil saw the participation of the cast of upcoming film “Kyaa Dilli Kya Lahore”, unveiling the first look along with the trailer.

A daily feature on the border is the beating retreat ceremony, watched by large cheering crowds on both sides.

The formal ceremony marks the closure of the gates.

Children and women swayed to the tunes of popular songs like “Rang De Basanti” and “Suno Zor Se Duniya Walon”. On the other side, songs such as “Sabse Pyara Hai Mera Pakistan” were played.

Delhi-based Nita Sharma, amongst the spectators, could barely contain her excitement after seeing the round-the-year border closing ceremony.

“It is such an amazing spectacle. I just love the aggression with which the soldiers of both countries do the march past. One doesn’t see this every day,” she said.