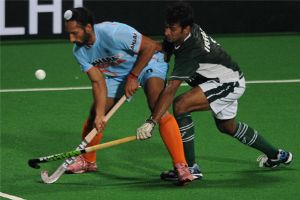 Islamabad: A two-member delegation of the Pakistan Hockey Federation (PHF) will visit India next month to discuss the revival of bilateral series, official said Tuesday.

Secretary of PHF Asif Bajwa told Xinhua that talks between the two sides had been in process for months and Hockey India (HI) officially invited them to discuss the modalities of a future series.

“We had very positive meetings with Indian officials during the London Olympics and finalized many aspects for revival of Pak-India bilateral series,” said Bajwa.

Indo-Pak sporting ties have been suspended for years, especially, after 2008 Mumbai attacks in India followed by a militants attack on the Sri Lankan cricket team in Lahore in March 2009.

The two-member delegation, comprising Bajwa himself and PHF President Qasim Zia, is likely to visit India Sep 15 to finalize modalities and to convince India to send its national team to Pakistan for a five-match series.

“It is our wish that India should visit Pakistan first as we have already visited them many times and I believe they will come here next year,” he added.

Bajwa further said that the resumption of ties would be in the larger interest of hockey in the region.

“Pakistan and India were major hockey teams in the world in the past because they played with each other on regular basis and we hope future bilateral series will again improve our game, standard and players’ stamina,” said Bajwa.