Karcham: With one turbine having begun power generation, a second one on trial run, Indiaâ€™s largest hydropower project in the private sector in all likelihood is to be commissioned ahead of schedule by mid August.

â€œThe 1000 MW Karcham-Wangtoo Hydroelectric project that has potential to generate 1200 MW of power would be commissioned 3 months ahead of schedule,â€ said DP Goyal managing director Jaypee Power Ventures Ltd (JPVL) as he led a media team around the project site on the banks of Satluj River in Kinnaur district of Himachal Pradesh.

The four turbines 250 MW turbines made by Vienna headquartered Andritz Hydro company have the potential to generate 306 MW of peak power, depending upon water availability and demand for power. 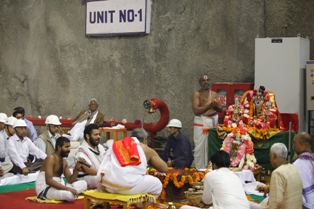 With the first turbine having become operation on 17th May, the second is targeted to be made operational by 15th June, the 3rd by 15 July and the last one by 15th August, said the company official. Earlier the project was projected to be commissioned by November, 2011.

It has cost the promoter Jaiprakash Associates group Rs 6903.37 crore to set up the plant for which civil construction works started on April, 2006. The debt-equity ratio of the project is 30:70 with 30 percent being the equity component.

The starting generation cost is expected to hover around Rs 3.35 per unit and the mega plant in a dependable year is targeted to generate 4368 million units of power.

For the first 12 years of the plant life, the generating company has to pay 12 percent free power as royalty to the government of Himachal Pradesh for surrendering the high value site. After that the royalty is scaled to 18 percent. The plant site has been leased out for 40 years by the state government.

Project director incharge Parveen Singh says that 80 percent of the power generated is to be sold to the states of Punjab, Haryana, UP and Rajasthan. The remaining 20 percent is merchant power that would be sold on spot charges basis.

Designed as a run off the river project, the main features of the Karcham-Wangtoo plant are a 88 meter high concrete gravity dam for diverting the water into 4 underground sedimentation chambers before the cleaned waters pass into a 10.48 diameter tunnel that is 16.925 Kms long.

The tunnel diversion obtains a 269 meter vertical fall that is diverted in 4 penstock tunnels for operating the turbines.

To prevent silt damage to machine parts, all critical parts have a tungsten-carbide hard coating to prevent any corrosion. The high silt content in River Satluj is known to damage machinery in hydropower plants.

Besides the new plant being readied for full generation, JPVL has been operating the 300 MW Baspa project, upstream of the Karcham-Wangtoo project, since 2003. In the Ganga basin in Uttrakhand, the group also operates the 400 MW Vishnuprayag project.

Having forayed into thermal power, JPVL later in the year intends to add another 500 MW of power from the 1500 MW upcoming greenfield Bina thermal power project in Madhya Pradesh.