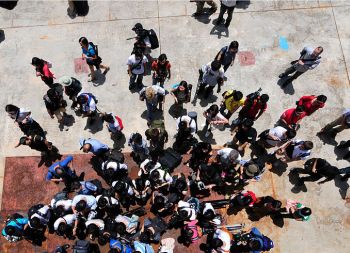 Beijing: China does not want to “engage in a carrier competition with the US or its Asian neighbours like India”, a state-run Chinese daily said Thursday.

An article in the Op-Ed section of the Global Times said: “…China has neither the desire nor the strength to engage in a carrier competition with the US or its Asian neighbors like India.”

“China won’t initiate a war, bully neighbors with which it has territorial disputes, and claim maritime hegemony. This is a cliched speculation held by those obsessed with the Cold War mentality, no matter how China explains its intentions,” it said.

The Chinese daily said the country’s first aircraft carrier, originally the Ukrainian Varyag, set off for its 10th sea trial Monday and it has been followed closely by overseas observers.

“Among external interpretations there are largely two tendencies: One sees the carrier as another symbol of China’s muscle-stretching strategy and thus hypes the increasing `China threat’, whereas the other disparages the Varyag as a `paper tiger’ and a carrier `in name only’,” it said.

“It’s hard to tell how long it will take before Western observers can rationally view China’s carrier development as a natural, necessary step in the country’s military build-up, just as with their own navies,” the daily added.

Calling the Varyag an important milestone in China’s rise, the article stressed that “China doesn’t want to stir up more concerns and worries among its neighbors. This is also why the nation keeps a low-profile and is cautious about publicizing every single move related to its carrier development”.

Stating that carrier development helps China to gain a strategic and political advantage in the increasingly complex regional dynamics, it said: “This is a pragmatic choice as the whole of Asia is entering the era of carrier development.”

The daily went on to say that China has been seeking more deterrent ability to secure its development environment.

“Its defensive policy won’t change no matter whether it enters the carrier era or not,” it assured.

India plans to operate at least two aircraft carriers at any given time. Its Indigenous Aircraft Carrier (IAC) is under construction at the public sector Cochin Shipyard in the southern Indian state of Kerala. India also plans to build another, larger IAC that will weigh about 65,000 tonnes and is likely to be called INS Vishal.